Slicks is a fictional character from the GoBots series. He is an evil Renegade GoBot who turns into a race car introduced in 1984.

Slicks was one of the Renegade followers of Cy-Kill who turns into a race car.[1]

In 1985 Pepsi Cola had a promotion where you could get a "Convert-Able" toy by sending in $1, three proofs of purchase from a Pepsi product and 50 cents shipping. One of the toys you could get was "Convert-A-Racer", who was a recolor of Slicks.[2]

Like most GoBots, Slicks has numerous abilities because of his robotic body. He does not age, can survive in space and is super-humanly strong and tough. He can fly in robot mode and project energy blasts from his hands. His body heals quickly when supplied with energy. He can turn into a race car.

Because the episodes of Challenge of the GoBots were broadcast out of order the events of episodes 41-45 take place directly after episode 1-5. 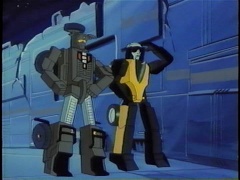 Geeper-Greeper and Slicks in Challenge of the GoBots

In Challenge of the GoBots episode 43, "The Fall of GoBotron" after Cy-Kill takes over GoBotron Geeper-Creeper and Slicks are assigned to guard the modifier. They are lured away by Scooter and lead into a Guardian ambush by Turbo, Small Foot and Sparky.[3]

In the story Cultural Appropriation by Fun Publications it was revealed that Ace, Bolt, Crain Brain, Dart, Gunnyr, Night Ranger, Slicks, Sparky and Wrong Way were sent to explore Level 51 when the Cataclysm threatened to destroy the GoBots home universe.

Slicks was featured in the 2016 Ask Vector Prime story Echoes and Fragments, set during the events of The Transformers: The Movie. The manipulations of the evil Gong and Sideways resulted in various GoBots swapping places with characters during the events of that film. Slicks participates on the attack on Autobot City, is damaged, and is later reformatted by Unicron into Fracture's armada. In the story Slicks is depicted as a recolor of Generation 2 Double Clutch. As Fracture's armada he is depicted as Robots in Disguise Classic Mirage in the colors of the white version of Crasher.[4]

Slicks appeared in the Transformers: Renegade Rhetoric episode 9 story "Cy-Kill For President", where he rallied the racing circuit in Indianapolis for Cy-Kill.[5]

A recolor of Machine Robo MR-32 F-1 Robo. Turn from robot to formula one racer.