Skyfire is the name of three fictional characters from the Transformers series. The first Skyfire is a heroic former Decepticon turned Autobot jet who was introduced in 1985. The second Skyfire is an evil Decepticon who appeared in the Robots in Disguise toy line in 2001.

Skyfire is a heroic Autobot scientist who turns into a jet. He should not be confused with Jetfire, a similar character.

Can escape Earths gravitational pull by use of his hydrogen fuel powered double jet thrusters. His battle helmet gives him 4 additional particle beam canons. In his super jet mode, he can get halfway round the world in 30 minutes. A peaceful scientist who performs outer space exploration, on the other hand he is a warrior in the Cybertron air force.

His appearance is that when Skyfire was in the Destron organization before they established their army millions of years ago. For outer space exploration, his body is protected by an unknown virus which prevents damage from magnetic storms. Although he has great combat skills, he prefers science and exploration.

On Cybertron before the war, Skyfire was a scientist and explorer working with Starscream. Together, they investigated an uncharted planet (Earth), where they failed to find any signs of intelligent life. Skyfire wished to scrutinize the planet further, and moving in close enough to the planet, a polar wind storm swept him up and buried him beneath the Arctic ice. Starscream searched for his friend, but was unable to locate him and returned to Cybertron alone. 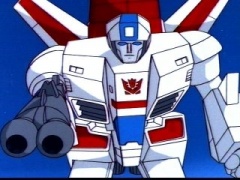 Skyfire on Earth after joining the Decepticons

Millions of years later, in 1984, the Decepticons excavated the frozen Skyfire while draining heat energy from the Earth's core and reactivated him. Reunited with his old friend, Starscream, Skyfire joined the Decepticon ranks. When the Autobots arrived, Skyfire engaged them in battle, and then rescued (the Autobots' human companions) Sparkplug and Spike Witwicky when they became stranded on an ice floe. Unknowingly, he took the two to Megatron under the impression that he and the other Decepticons valued human life, but when Megatron took them as prisoners, Skyfire started to question his allegiance. When Starscream ordered him to destroy the captured Autobot search party, he refused, and Starscream turned his weapons on him, leaving him heavily damaged. Repaired by Ratchet, he joined the Autobot side and engaged in a dogfight with Starscream which ended when he sacrificed himself to stop the core drain, burying himself in ice once again in the process.

A short time later, however, Skyfire was recovered by Wheeljack and Sideswipe, and immediately participated in an attack on the Decepticons in Peru, where the antagonists were once again attempting to use the Earth's core energy for their own means. Skyfire was almost permitted to destroy the villains' new weapon by Thundercracker, but was then blasted by Starscream and repaired with some difficulty by Spike.

Skyfire would go on to make semi-regular appearances in the immediate future, helping the Autobots evacuate their base when the volcano it was embedded in became active, and flying a squad of troops to battle the Insecticons.[1]

In episode 27 of Transformers: The Headmasters Skyfire was present at Autobot City while the Headmasters were repairing Fortress Maximus.

Skyfire was featured in the 1985 audio and book adventure Satellite of Doom. During the story Skyfire is killed.

Skyfire appeared in the audio and book adventure When Continents Collide.

Ramjet questioned Starscream about the new mech they'd found frozen in a glacier up in the Arctic Circle, but Starscream had unsavory plans for it involving a mask/helmet thing.

Back in Japan, the Seekers raided an energy plant, revealing the newcomer as Skyfire. Amidst the plundering, Skyfire pleaded with Starscream to stop shooting at the human workers, but to no avail. Luckily, the Autobots showed up to save the workers. Skyfire's pleas caused Starscream to yell at him, exclaiming that Skyfire's reason for living was to be a soldier. Just before getting shot at, Skyfire finally ripped off the control helmet and declared himself a scientist (with a sweet new Autobot symbol, too). However, he said he would become a soldier, if only to defend humans from those like his old friend. Watching the Seekers retreat, Skyfire wistfully reminisced that he and Starscream never really got along that well in the past, anyway. 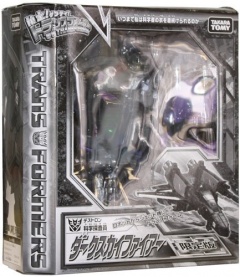 A recolor of Robots in Disguise Classic Voyager Jetfire.

A recolor of Robots in Disguise Classic Voyager Jetfire.
This toy was repurposed into Shattered Glass Jetfire.

In Transformers: Robots in Disguise, Skyfire is as loyal to devotion to Megatron, in contrast to his wing-mech Wind Sheer.

You can always count on Skyfire to get the job done. He is totally dedicated to Megatron's evil plans, and is as unswerving in his loyalty to the Decepticons as he is straight and true in his jet flights. Skyfire's strength and determination make him look like one big, mean flying machine when he's coming in to strafe Autobots into crumbled bits of sheet metal.

Skyfire is a recolor of the Machine Wars Skywarp/Thundercracker mold. Skyfire transforms from a Dassault Rafale fighter jet to robot mode with a single-step, spring-loaded transformation. The two halves of his rifle store in his lower legs in jet mode. He was only available in a Deluxe-level two-pack with Tow-Line. This mold was also used to make Beast Wars II Dirge, Robot Masters Wingstun and BotCon 2006 exclusive Darksyde Waspinator.

In 2004 Skyfire was the Japanese name of Energon Jetfire.