Sky Fly is a fictional character in the GoBots series introduced in 1985. He is a heroic Guardian GoBot who turns into a jet.

Sky Fly is a heroic Guardian GoBot who appeared later in the GoBots toy series.

Like most GoBots, Sky Fly has numerous abilities because of his robotic body. He can survive in space and is super-humanly strong and tough. He can fly in robot mode and project energy blasts from his hands. His body heals quickly when supplied with energy. He can turn into a jet.

Flying across the upper limits of the atmosphere, Sky Fly watches the activities on Earth. If only the Renegades realized he was spying on them! Swift and alert, Sky Fly never lets anything or anyone get past him.

In the story Cultural Appropriation by Fun Publications it was revealed that Beamer, Defendor, Destroyer, Flip Top, Guide Star, Mach-3, Sky Fly and Water Walk were sent to explore Level 63 when the Cataclysm threatened to destroy the GoBots home universe.

Sky Fly was featured in the 2016 Ask Vector Prime story Echoes and Fragments, set during the events of The Transformers: The Movie. The manipulations of the evil Gong and Sideways resulted in various GoBots, Rock Lords and Starriors swapping places with characters during the events of that film. Sky Fly was killed by Megatron at the battle of Guardian City.[1]

In the Transformers: Renegade Rhetoric story "Opportunity Knocks Part 2", Cy-Kill chronicled his return to "Level 1", his home universal stream, just as the Guardians were staging an attack on Rogue Star. Cy-Kill and his Renegade recruits from Axiom Nexus joined Fitor, Spoons and Stretch in repelling an attack by Courageous, Leader-1, the Guardian Command Centers and the new Guardian Academy graduates Beamer, Guide Star and Sky Fly. During the battle Monsterous was able to best Courageous and tore though the Command Centers, but a ploy from Leader-1 tricked Cy-Kill into unleashing a massive blast which struck Monsterous, shattering the combiner into his components.[2] 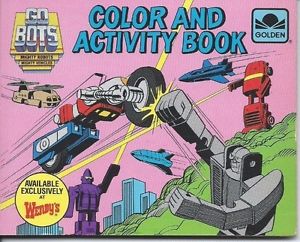 Note: Although Sky Fly appears on the cover of the GoBots Color and Activity Book by Golden Press, all his illustrations in the book depict Guide Star as his robot mode and Leader-1 as his jet mode.

Sky Fly appears in the 1986 Golden Press story Ambush in Space. In the story the Guardians decide to take a vacation on one of the resort planets. They take the Command Center and their first stop on a refueling planet, but after taking off their engines conk out thanks to micro dust in the fuel placed by Cy-Kill. The Command Center is drawn to the planet Fintergand by an electromagnet operated by Cy-Kill. Once forced to land Pow Wow attacks Scooter, but his attack is deflected by a boulder thrown by Sky Fly. Cop-Tur attacks Leader-1 with rust rockets, but he tricks the rockets into following him to Cy-Kill. Cy-Kill gets hit by the rockets and rusts in place. Pow Wow attempts to ram Beamer, but Beamer flies out of the way at the last moment, causing Pow Wow to hit Odd Ball instead. Breez attempts to hide from the Guardians in a crater, but Guide Star and Sky Fly shoot "obmug" into the crater. The Guardian GoBots sing their victory song.[3]

Guide Star and Sky Fly were among Leader-1's troops in the 1985 story "Moonstrike", a comic strip published on a Wendy's Kids Meal box. In the story the Guardians and Renegades battle on Earth's moon. Cy-Kill threatens to shoot Leader-1 with a magnetizing ray gun. Guide Star spots a falling meteor and deflects to hit Cy-Kill. Their leader damaged, the Renegades retreat to Thruster.

A new mold by Tonka. Turns from robot to jet. A Wendy's restaurant exclusive.