Skullgrin is a fictional character in the Transformers series. Introduced in 1988, he is an evil Decepticon Pretender.[1] He is not to be confused with Dauros, who is the Japanese character based on the same toy.

Like several other Pretenders, Skullgrin's personality changed somewhat when he received his Pretender shell. Normally a cool, calculating combatant, inside the shell he becomes a rampaging engine of destruction that tries to destroy everything in his path, never retreating. It has been speculated that the shell has a personality of its own. However, the egotistical Skullgrin has a surprising personality quirk — he loves Earth and is fascinated by it. Making him very different from other Decepticons. In his affair with Circuit-Breaker, he actually bargained for fuel instead of fighting to avoid any casualties. Skullgrin's Pretender shell is easily distinguishable by having the skull of a bovine animal for a head. The shell's dark gray color, multiple spikes, and skull ornaments on its belt give it a menacing appearance, similar to Judge Death. The inner Skullgrin robot transforms into a Cybertronian tank. [2]

Biography: Skullgrin began his tenure as a Decepticon warrior with great promise. He was an incredibly powerful and intelligent war machine, but his reliance on logic became a detriment in his function as a siege warrior. His commanders demanded a more spontaneous, brutal approach, which the rigid and calculating Skullgrin couldn't comply with. The solution came when Skullgrin adopted a Pretender shell. The armor itself contained a "shell" program to bring out Skullgrin's basest most savage combat instincts. The program worked so well that Skullgrin is a completely different being when in his shell. The formerly calm and collected field commander of the Decepticon Pretender unit becomes a snarling and unstoppable beast that will stop at nothing to destroy his foes.

Weapons/abilities: Subject is incredibly strong and highly intelligent He is an expert military planner and tactician as well as a capable warrior. His Pretender shell amplifies his strength even further; in this mode, he wields a vibro sword that creates the optimum vibrational frequency for tearing through the armor of whatever target it is locked onto. In robot mode, subject transforms into an assault tank that fires shrapnel bursts from its turrets, which are also useable in robot mode. Subject also wields two "slagmaker" laser cannons in both modes; they can be combined to form a double-barreled cannon useable by the Pretender shell.

Weaknesses: In his shell, subject gradually loses his capacity for rational thinking. His wild fighting when he degrades into this state is formidable, but his ability to lead or plan strategy is greatly reduced.

Although the US Transformers animated series was canceled before Skullgrin was brought out, his Japanese counterpart Dauros appeared in the Masterforce anime series. Skullgrin's only appearance in animation was in early commercials for the Pretender toys.

In a story called "By their Blasters you shall know them ...!" from Transformers Comic-Magazin issue #12 by German comic publisher Condor Verlag Optimus Prime instructs Backstreet, Bumblebee and Ruckus on how to identify Autobots from Decepticons in battle using the Ark's computer. Skullgrin is one of those he displays to the Autobots.[3]

In a story called "Memories of Bumblebee" from Transformers Comic-Magazin issue #15 by German comic publisher Condor Verlag Bumblebee views a recording of Optimus Prime where he identifies Autobots and Decepticons in battle using the Ark's computer. Skullgrin is among those he displays.[4]

In Dreamwave Productions' re-imagining of the Transformers universe, Skullgrin was part of Starscream's Predacons faction. He was included in the party under Starscream who lost a shipment of Energon to Grimlock's Lightning Strike Coalition in the first issue of the second War Within series. The series takes place prior to the pretenders getting their shells.

Skullgrin appeared in Invasion Prologue by Fun Publications where is was one of the Decepticon troops under the command of Gigatron.[5]

In Tranformers Invasion Skullgrin and Octopunch attempt to take the rarified energon from the Autobot Ironworks base. They are defeated by Scoop and Shattered Glass Octopunch.[6]

Skullgrin made his first IDW Publishing appearance in The Transformers: Stormbringer, where he was one of Bludgeon's cultists. Capturing Jetfire and the Technobots, they then reanimated Thunderwing with the intention of using him to destroy other worlds in the hopes of reviving Cybertron. Hoping to gain his own Pretender shell, Skullgrin and his fellow cultists were defeated by The Wreckers.

His first appearance was in issue #40 of the US comic in a story called "Pretender to the Throne", where Scorponok created the first six Decepticon Pretenders. [7]

In the Marvel Transformers comic, Skullgrin's most notable appearance was when he accidentally met the sci-fi actress Carissa Carr, who was starring in a new sci-fi monster thriller named Monstercon from Mars. The machine playing the Monstercon had broken down, and Skullgrin agreed to star as the movie's villain, replacing the Monstercon. This led to an enormously successful movie star career, but it was abruptly cut short by Circuit Breaker, who struck Skullgrin down after learning he was a Transformer robot instead of an organic monster.

Skullgrin was also featured on the cover of issue #54 "King Con". In the issue itself, he and Iguanus were dispatched by Scorponok to rig a transceiver on top of the Empire State Building to allow them to produce energon cubes. The plan was thwarted by the Autobot Micromasters. Skullgrin returned to the Scorponok-led Decepticons afterwards and served with them until the coming of Unicron.

The Decepticon Pretenders Bomb-Burst, Iguanus and Skullgrin were sent to steal from an oil rig in the "Gulf of New Mexico" in the 1989 UK Annual story "The Chain Gang." They were opposed and captured by the Autobot Pretenders Cloudburst, Landmine and Splashdown.

Skullgrin made a brief appearance in the Transformers: Generation 2 comic series, as the lone surviving member of a party of Decepticons that were assaulted by the forces of Jhiaxus. He was killed while trying to radio Megatron for help. 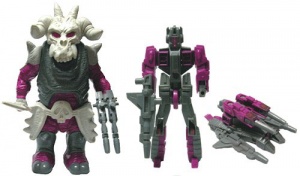 This toy is identical to the toy sold in Japan as Dauros.[9]

A remold of Generations Darkmount.[10]