Seaspray is the name of four fictional characters from the Transformers series. They are all Autobot hovercrafts. In later toys he is called "Sea Spray." Third party Transformers that are homage to the original Seaspray have been made by Maketoys and iGear.

Seaspray is a fictional Autobot character from the Transformers: Generation 1 line.

Displays a zest for his job unmatched by fellow Autobots. Loves the ocean and its creatures... unhappy when he returns to land and reverts to robot form. Loves the thrill of naval battle. Can go 120 knots, 4000 mile range. Has sonar radar and underwater and surface-to-air lasers, also used in robot mode. Wheels allow limited land travel. Not too strong or mobile as robot.

Seaspray was picked as the 5th worst Transformer of all time by X-Entertainment.[1]

Seaspray was originally part of an Autobot group in the "Dead End" region of Cybertron. He was part of the group that went to save the captive scientist Spanner. Accompanying the others to blow up the Decepticon base, they were horrified to discover that the Decepticons had built Spanner into the Space Bridge itself. Destroying the Bridge as a mercy-killing, Seaspray and his comrades (Beachcomber, Blaster, Warpath, Perceptor, Cosmos and Powerglide), with no chance of escaping to Cybertron, crossed the bridge to Earth.[2]

After a side-adventure in the UK comics in which they encountered (and were almost killed by) the future Decepticon Galvatron, Seaspray's group linked up with the main Autobots - only to learn of the death of Optimus Prime. From then on Seaspray would appear less as more characters were introduced. Seaspray was last seen to be dragging the deactivated Blaster away after the Underbase powered Starscream's rampage. He was apparently deactivated at some point since in the UK Christmas story "The Greatest Gift of All" as he is among the Autobots Optimus Prime considers reactivating with a fragment of the Creation Matrix.

Seaspray, like many other season 2 Transformers, originally appeared in the episode "Dinobot Island Part 2".

His most prominent appearance was in the episode "Sea Change", when he was sent alongside Bumblebee, Perceptor and Cosmos to the planet Traal in response to a distress signal. The Decepticon tyrant Deceptitran had enslaved the planet, and the arrival of Megatron's forces only worsened the situation. Seaspray then fell in love with Alana, one of the leaders of the resistance. After the two performed a daring rescue of the captured Bumblebee, Seaspray learned of the Well of Transformation, an energy source that transformed living beings into whatever they desired. Seaspray entered, and emerged a Traal male. Although Alana fell in love with him, an attack by Rumble convinced him he would be more use to the Traal as an Autobot, and entered the pool once again. Although it was successful, Alana emerged as a robot too. The two defeated Deceptitran and forced Megatron's forces to flee. The two (Alana having returned to being human) then departed into the sunset. Seaspray spoke with a gurgling tone in his voice.

Like many other Transformers from the first two seasons, Seaspray was gradually phased out in the third season. He last appeared in "Thief in the Night."

Seaspray was the spokesbot in an unreleased Transformers "Knowing is half the Battle" public service announcement where he taught kids to always wear a lifejacket on a boat.[3]

Seaspray was featured in the 1985 Find Your Fate Junior book called Dinobots Strike Back by Casey Todd.[4] 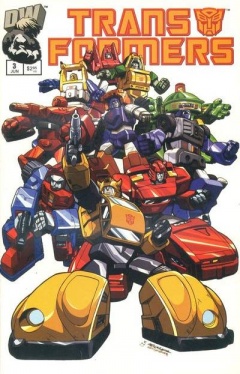 Following the liberation of Cybertron from Shockwave’s rule, Bumblebee was placed in command of the Autobot supply shuttle Orion, with Powerglide, Warpath, Seaspray, Cosmos, Cliffjumper, Bumper and the Powerdashers assigned to him. Their mission was to aid the Autobots on Earth. Upon arriving in the Earth system from transwarp space, they witnessed the arrival of Sunstorm (Transformers: Generation One III #1). Seaspray was one of those who battled against him, but was deactivated by his energy powers. He did not reappear before the end of the Ongoing comic, when Dreamwave fell into bankruptcy.

Seaspray appears in the story Generation 2: Redux where he is among the reinforcements from Autobot City to respond to the Decepticon attack at the Large Hadron Collider in Switzerland. Once there the Autobots are able to defeat the Decepticons, but during the fight the Autobots are exposed to refined Forestonite, which enhances and mutates Cybertronian systems. He gets enhanced to his Generation 2 form.[6] 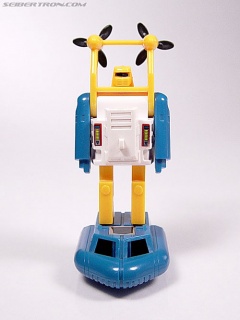 A redeco of the Generation 1 toy in metallic blue.

Leaked character design models revealed that a Transformers Animated version of Seaspray was set to appear in the show.[8]

An evil counterpart of Seaspray is a member of the Autobots in the Transformers: Timelines Shattered Glass storyline. He is very talkative.

Although not depicted directly, Seaspray is one of the many Autobots aboard the Ark in Do Over. The Ark launches from Cybertron for Earth under the command of Rodimus and is followed by the Decepticon ship Nemesis, under the command of Starscream. While battling over Earth it is shot down by human defense systems.[9]

Seaspray is among the Autobots under the command of Rodimus on Earth, having crashed in the Ark. He recovers cash from sunken a sunken California city for the Autobots to use in their plan to take over the Earth.[10]

Though Sea Spray does not appear in the 2007 Transformers film, he is referenced in the official video game adaptation by Activision in the form of a billboard for "Seaspray's Fish 'n' Chips". Also, in the Nintendo DS adaptations of the game, the fishing ship at the Tranquility docks is named USS Seaspray.

The [email protected] podcast for February 4th, 2010 selected pictures of Voyager Seaspray as one of the New Picture Picks.[11]

Many Decepticons believe that while the Autobots may rule the land, the sea is safe. Those Decepticons have never met Sea Spray. Crankstart thinks he's safe hidden on a remote African shore, but he's about to get the worst shock of his life. Sea Spray will come screaming out of the surf, turning the beach into a blasted wasteland with nowhere to hide.

An all-new Voyager class figure that transforms into a hovercraft. The bed of his hovercraft mode can fit Legends or Scout class figures.[12][13][14][15]
The mold for this figure is also used for Deep Dive in the Transformers: Reveal the Shield toy line.

The Japanese version of this figure by Takara Tomy has all of the gold-colored parts repainted in yellow, making him more of an homage to the original Generation 1 toy than the Hasbro version.