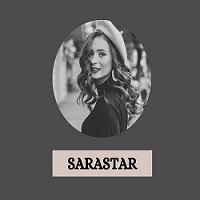 Sarastar, a singer, songwriter, and composer from Monaco, grew up in the 80s in a home filled with music from Bach to The Clash to Stan Getz and Keith Richards. His father worked closely with recording studios and concert halls in Monaco and Milan, renting musical instruments. He would take her there whenever possible and wanted to pass on his passion to his daughter, who was already amazed by the world of music. She played her first scores on the family piano that was in the house, an inheritance from her grandfather, himself a musician.

Passionate about singing and music since childhood, she actively participated in the school choir and discovered a passion for music. That's when she knew she would dedicate her life to it. Born in Paris on December 25, 1985, Sarastar is the fourth child of a sibling family, which will be enriched by three other younger children.

The little girl shares the daily life of a well-to-do family. The first steps of Sarastar in the field of music take place under the benevolent glance of her parents who support her in particular her father, impassioned about Jazz. This last one encourages the young girl to continue on the way which seems to hold her really in her heart. It is then that her desire to learn and improve in this field was born and that she decided to orient herself more in this way.

The young girl has for models voices such as Tina Turner, Bonnie Tyler, or Cher that she particularly idolizes but also the group Genesis. These personalities will influence Sarastar in her life and will accompany her all the time, the singer having never stopped listening to their classics. During her adolescence, Sarastar decides to diversify and approaches the lyric song which directs it with the passing of years toward jazz and rock. In parallel to her singing lessons, she joined the Paris Conservatory in 2000 to enrich her artistic training. There she met Damien, Chris, and Lisa with whom she formed her first band in 2003.

In 2005, she moved to New York where she attended jam sessions and met musicians from the local indie scene, with whom she collaborated. Then she recorded her first EP under the pseudo-Sarastar in 2010. Since then, Sarastar has traveled a lot, especially in Asia and South America, two regions she particularly likes, which allowed her to draw inspiration wherever she went. She lived two years in Mexico with her best friend and then a year in Colombia alone to live a life with Latin American colors, enjoy and recharge her batteries in order to come back to the United States more motivated than ever.

So in 2013 Sarastar returned to Paris where she then releases, the first album of original songs, combining pop, rock, and electro. She travels directly after the release of her first album to Italy and meets pianists, and drummers, and befriends a local band with whom she still collaborates today. The young singer was able to meet many people, from the musical world or not, with whom she befriended and kept in touch over time allowing her to create an important address book.

In 2018, she was invited to play on a small shared stage at the Pitchfork festival in Paris with several other independent artists alongside, among others, the singer Anaïs and even Étienne Daho that same year. There she met her current partner, Michele, himself in the music business, more particularly in sound engineering. With this passion in common, Thomas accompanies Sarastar in each of its displacements, with each representation, and shows support without fault near his companion. The childless couple thrives in their rhythmic daily life, surrounded by their band of friends they go out, make music and enjoy this rock'n'roll lifestyle.

Back in her hometown for 10 years now, she never stops creating, learning, and expanding her field of action. Sarastar has been touring Europe as part of tributes to pop and rock stars like Elton John, Leny Kravitz, and ACDC.

Today her life is divided between the stage and the studio, where she is working on the writing of a new Pop-rock project that will be released soon. She also writes for other artists, lends her pen and her musical talent, and gives, from time to time, singing lessons in elementary school in the Paris area.

Closely followed by her friends and family, it is her younger sister Nina who manages her career. She has a fundamental role of manager and takes care of her social networks as well as her contracts with the places where she is brought to represent herself and also her schedule, like a real Rock Star.

Thanks to her different school, professional and social experiences, Sarastar has managed to make a living out of her passion, to make her relatives proud, and above all to make a name for herself on the Parisian amateur rock scene. Fascinated by music, Sarastar does not stop setting goals and would like to reach the mythical stages and places of the capital thanks to her art as a musician in order to be able, once again, to evolve and add a string to her already well-supplied bow.