Roswell is a fictional character and third-party Transformer homage to the GoBot Path Finder made by iGear and an exclusive toy available at TFcon 2013.

Roswell is a third-party Transformer homage to the Guardian GoBot Path Finder.

According to her tech spec numbers Roswell has unmatched speed, and incredible intelligence and skill. She is also very high ranking.

Roswell is a recolor of UFO, who was designed by Cassy Sark.

A blue recolor of iGear UFO as Path Finder was suggested as a TFcon exclusive on the Cybertron.ca message board by Bruticus82 in August 2012.[1]

The biography for Roswell was written by Daniel "Protoman" Arseneault. According to him, after being told they could work with the UFO mold they considered homages to Path Finder, Scrounge and Omega Supreme, but went with Path Finder. It was forum member Super_Megatron who named the character Roswell in reference to the famous reported UFO crash landing in Roswell, New Mexico. Her Path Cannon weapon is probably a reference to her GoBot name Path Finder.

The profile for Roswell was posted to the TFcon web site in April 2013.[2]

The [email protected] podcast for May 3rd, 2013 selected information about Roswell and Van Guardian in the news.[3]

Profile: Originally a beautiful humanoid, when the Terrorist Gobits nearly destroyed their planet, she was forced to take on the form of a robotic space craft to aid in the war against BIKEMURDER. As the battles raged on, she became a seasoned warrior and trusted solider, so much so that in the absence of CAPTAIN-1 and TURBOLAG, she is left to command the whole Good Gobit army. In a recent mission; ROSWELL and a skeleton crew of bots, tried to find a solution to their home world and universe being wiped out by an unknown cosmic factor; it resulted in ROSWELL having to change her robotic form to match that of the local esthetic in a strange new dimension where everything was “More Than Meets the Eye”. Thanks to the Modifier, a machine from her home universe, she has finally achieved a design, color and body that she is somewhat pleased with, but even ROSWELL feels it could be better.

Abilities: Like all other Gobits, she has the standards of robot mode flight and high powered laser based pulse blasts from her fists. Unique to her design is that in UFO mode she is capable of light speed travel. Armed with her Path Cannon she can fire a short range blast that emits small sized black holes. ROSWELL is always looking to upgrade her weaponry to keep up with the ongoing conflict.

Weaknesses: She always drives to be better and thus some of her teammates feel she pushes herself to the point of exhaustion. She also can be a little vain sometimes, as she used to be a very curvaceous and beautiful humanoid and is not pleased with her more current blocky robot body. 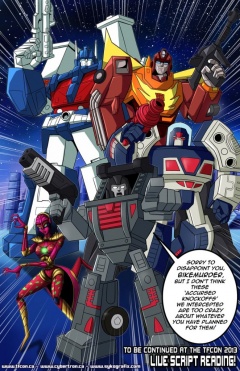 A recolor of UFO. Turns from robot to flying saucer. Comes with a path cannon accessory and stand.
Limited to 500 pieces.

A set of labels for iGear's Roswell and Van Guardian.[4]