Roadbuster is the name of three fictional characters from the Transformers series.

Roadbuster's bio described him as happiest when he is in battle destroying Decepticons. While he is an inspiring presence and natural leader in battle, he doesn't adapt well to the quiet times between battles. He gets bored and restless easily and doesn't socialize well with his comrades.

Roadbuster was among those Transformers toys that did not appear in the Transformers animated series because the show was going to appear in Japan, where the toy was owned by Takara's rivals.

Roadbuster appeared in the second volume of the Generation 1 comic and aided Ultra Magnus in fighting the rampaging Menasor. He later appeared again alongside Defensor and other Autobots to aid Grimlock to defeat a Sentinel.

Roadbuster appeared in issue #2 of Megatron Origin. In this story, set on ancient Cybertron he was a member of an Autobot security force in the city of Kaon. His squad was hunting the operators of gladiatorial contests in the degenerate slums, particularly Megatron.

Roadbuster, in Cybertronian form, appeared in issue #2 of the Stormbringer series by IDW Productions. He aided Springer's Wreckers on the planet Varas Centralus in the Kol system when Optimus Prime redeployed the Wreckers for a mission on Cybertron. He fought the cultists under Bludgeon and later fought Thunderwing himself to provide covering fire for Twin Twist and Topspin - but was taken out by Thunderwing's shockwave attack. He was later seen inspecting Thunderwing's inert body.

Roadbuster made several appearances in the Marvel U.K. comic as a member of the Wreckers led by Impactor and later Springer. He was part of the Wreckers for many of the Marvel stories, taking part in such missions as Operation: Volcano, an Autobot resistance plan to remove some of the Decepticon's most lethal operatives (which was foiled by the presence of the future Decepticon's arrival on Earth Galvatron Cyclonus and Scourge) and stopping the mad scientist Flame's plan to turn Cybertron into a warworld. It was during a later mission to stop Galvatron (at the centre of a rift in time and space) that the Wreckers encountered Galvatron and his ally - a clone of Megatron, and the elite squad was routed. Although Roadbuster managed to destroy half of Galvatron's face with an experimental weapon, he was killed when the weapon blew up in his face. 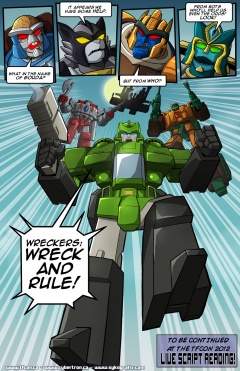 Rattrap, Silverbolt, Dinobot and Cheetor witness the arrival of Springer, Boardside and Roadbuster in Days of Wreckening

Roadbuster appears in the TFcon 2012 live script Days of Wreckening. In this story is a member of the Wreckers who confront the Constructicons and Predacons on prehistoric Earth.[1]

The toy company Hasbro licensed a robot toy from the Japanese anime series Dorvack (1983–1984) to sell under the new name Roadbuster. The original robot was "VV-54 AR Mugen Calibur", and Katsumi Itabashi and Nobuyoshi Haraba designed the mechanics in Dorvack.[2]
The Deluxe Autobots were larger and more intricate than most of the other Autobot toys of 1985.[3]
In the 1980s Transformers were such a success that Hasbro wanted to get as much product out on the shelves with the Transformers name on it as possible. Since they were running out of old Takara molds to use, they obtained licences to use the molds of other companies' robot toys in the Transformers line. Roadbuster, Shockwave, Jetfire, Omega Supreme, Whirl, Chop Shop, Venom, Barrage and Ransack were among those molds. With the licences to those toys now expired Hasbro and Takara no longer have legal rights to those figures and cannot reissue them.[4]
The same toy was imported in the Convertors toy line in the 1980s as the Defenders Wheels.

A remold of Energon Strongarm was planned as a BotCon exclusive and as an homage to Generation 1 Roadbuster, but it never made it past concept art. This toy was supposed to represent an upgrade of Roadbuster in the Transformers: Universe story.

Roadbuster was the Takara name for the character called Ironhide by Hasbro in Transformers: Energon.

According to his bio, Roadbuster and his partners specialize in traveling across the galaxy to hunt down Decepticons. In the film, he speaks with a Scottish accent. Roadbuster has a pair of shoulder rockets and some chain guns on his hands.

Roadbuster, Leadfoot and Topspin are a team of Autobot engineers called the Wreckers, who came to Earth in their ship the Xantium which carried other Autobots, including Sideswipe. NASA took possession of their ship and Director Mearing mentioned they were rarely let off base due to their behavior. When Sentinel expelled the Autobots, the Wreckers prepared the Xantium for launch, but Starscream destroyed their ship as it was leaving. In the battle in Chicago, Roadbuster and the other Wreckers killed the pilot of a Decepticons fighter, and revealed to Sam that they had hid in a booster rocket which detached before Starscream attacked. When Shockwave attacked their convoy and Optimus lost his trailer, they created a diversion so that Optimus could retrieve it. Later they helped Optimus untangle himself and were among the surviving Autobots at the end of the film.

All toys of this character are officially licensed from General Motors and feature a NASCAR holographic seal, making them official NASCAR merchandise.

A new mold. His car mode is depicted as fully armored, with robot parts and weapons sticking out of the car body.[6]

A new mold of Roadbuster. His MechTech weapon is a blaster with a retractable chainsaw. The head sculpt is designed to resemble a stereotypical Redneck NASCAR fan, sporting a Mullet and a baseball cap. Due to licensing limitations, Amp Energy and National Guard are the only sponsor logos on the figure, as the quarter panel and deck lid sections.[7][8] However third party sticker sheets have been produced that give Roadbuster all his correct sponsorship decals for a more screen-accurate appearance.

A Walmart exclusive orange and white redeco of the Deluxe figure based on the 2010 Amp Energy Juice paint scheme.

A new Human Alliance mold, with his car mode depicted as fully armored. Comes with 2-inch Sergeant Recon figure, which is dressed in a green and white racing suit similar to that of Dale Earnhardt, Jr. For reasons unknown, the "88" on the roof and sides is printed in a generic font instead of the actual logo used in the real stock car. A second release has the actual "88" decal and sponsor logos printed on the car panels.

Roadbuster was mentioned in the episode "Loose Cannons" by Wheeljack, as one of the Wreckers who was killed in action.

A remold of Generations Swindle. Turns from robot to Cybertronian armored truck.