Renegade Victory Part 2 is a fictional story in the Transformers: Renegade Rhetoric series. Written in 2016, it retroactively took place in an unaired second season of the Challenge of the GoBots animated series.[1]

Second part of Cy-Kill's attempt to change history so Leader-1 was never created. 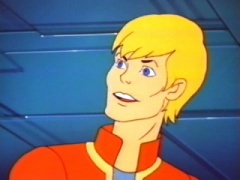 Nick Burns in Challenge of the GoBots

Inside the prison, Fly Trap and Decker Decker advanced on Scooter and his humanoid charges, grumbling threats. Luther's eyes darted to and fro, and then he ran right through Fly Trap's legs. "You lummoxes are too big for your own good!" Fly Trap swatted after him but only managed to fall over. Decker Decker dove at him, but Luther dodged at the last second. My men were getting madder and madder, and despite standing orders to keep Luther alive, they charged their blasters and fired simultaneously. Sadly, that was exactly what Luther wanted; he dropped to the floor as they each fired, hitting each other and knocking themselves out. "That was some fancy footwork, Leader, er, Luther," quipped Scooter. Nick, too apologized for doubting him. Luther waved it off. "No time now, friend, we've got two worlds to save!"

Outside GoBotolis, Zod gave an ominous growl. Turbo and Throttle backed away as Cop-Tur urged the beast on. What my idiot lieutenant failed to notice was Van Guard sneaking around behind him. The next thing he knew, Van Guard picked him up and shoved him directly into Zod's mouth. His muffled protests could be heard even as the beast attempted to shake him loose. "Time to go,"

When Guardians met up at the rendezvous point, Luther Unum took charge. After taking stock, he realized they needed to get back to Saeculum Gamma, and asked for suggestions. Major Mo suggested commandeering a ship from the nearby Museum of Guardian Failures. After disabling the guards, they stole a battered Command Center and set off for the Time Portal.

As soon as I realized what was happening, I ordered our entire Thruster fleet to Saeculum, with me at its head. I planned to drown the Guardians and their lone stolen Thruster. Unfortunately, the resistance on Earth and the subjugated Guardians on GoBotron used that distraction to rise up in open revolt. Matt rallied humanity against our occupation on Earth, and Dozer and Street Heat initiated an insurrection on GoBotron, at Zeemon's orders. The old buzzard had been biding his time, merely pretending to be broken to my will. Fitor insisted we turn half the fleet around to quell this open revolt, and I relented. After all, half of a Thruster fleet should still be more than enough for a single stolen Command Center.

We arrived before the Guardians and set up a blockade. The instant the Command Center dropped out of hyperspace we blew it to scrap, thus ending the threat of Leader-1 and his Guardians once and for all. Filled with confidence I sent my fleet back to deal with the open revolt on my two worlds. But just to be sure, I personally headed down to the planet to destroy the Time Portal. No fool am I.

This precaution turned out to be quite necessary, as the Guardians had jettisoned in a life pod shortly before emerging from Hyperspace. Under Luther's direction, they fought their way past the token resistance I had left in orbit, disabling Pincher, Twin Spin, Destroyer, and Sky-Jack, though Major Mo blew up in the process. Luther seemed to take his death to heart, vowing "never again, Renegades." They arrived at virtually the same instant as my core team. The four of us hammered away at the Guardians, but unseen by us Nick and A.J. managed to sneak Luther Unum to the window. He bid them farewell, told them he would never forget what they had done for him, and jumped through. Reality wavered and shimmered, and then Leader-1's voice boomed through Turbo's comm, complete with unmistakable metallic twang. Throttle blasted the Time Portal, depriving me of the ability to attempt this particular gambit again.

We withdrew, the only four Renegades who remembered the glorious timeline that might have been. I can only imagine what saccharine pap Leader-1 shared with the few Guardians and humans who remembered the alternate timeline. What I find particularly galling is the idea that seeing this very timeline as Luther Unum may well have played a part in forging Leader-1 into the Guardian he is today. Alas, only those who roll the dice have a chance to win, and though I gambled and lost, I regret taking the risk not at all. Besides, it gives me something to strive for, the memory of my complete and total Renegade victory.

Charles Ellis: Shouldn't Luther/Leader have remembered you when you two met for the chronological first time, or do you think he was hoping he could - urg - 'rehabilitate' you?

Cy-Kill: You know, I don't think he ever saw my face or heard my name spoken in his presence. Cop-Tur stuck him in an oversized sack when he grabbed him, so Luther only heard my voice, and even then it would have surely been quite muffled. The Guardians mostly referred to Renegades in aggregate, rather than me specifically.