Pul-e-Charkhi (Persian: زندان پل چرخی), also known as Afghan National Detention Facility, is the largest prison in Afghanistan east of Kabul. Construction of the jail began in the 1970s by order of former president Mohammed Daoud Khan and was completed during the 1980s. The prison became notorious for torture and executions after the 1978 Saur Revolution as well as during the 10 year Soviet war that followed.[1] Between April 1978 and the Soviet invasion of December 1979, the communist People's Democratic Party of Afghanistan (PDPA) under Nur Muhammad Taraki executed around 27,000 political prisoners at Pul-i-Charki.[2] The Afghan National Army's 201st Corps is based nearby Pul-e-Charkhi.

A communist-era mass grave, close to the Poli Charkhi prison, was discovered in December 2006 by the NATO-led International Security Assistance Force (ISAF) and is believed to hold some 2,000 bodies.[5][6] Officials of the Afghan Ministry of Information and Culture believe that the massacre took place between 1978 and 1986 when the Moscow-backed communist presidents, Nur Muhammad Taraki, Hafizullah Amin and Babrak Karmal were in power. 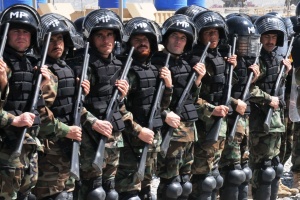 On 26 February 2006 riots were apparently sparked by a new prison policy forcing prisoners to wear bright orange clothing, the colored clothing rule was enacted to avoid events similar to the January escape. The February 2006 riot resulted in six deaths, and 22 injured in critical condition according to the International Committee of the Red Cross. The rioters used makeshift weapons to attack guards, then ignited furniture, and smashed doors and windows. Eventually, they took over a wing of the prison which they held for a few days.

On 16 March 2008, after a two-week dispute over arrests following an attempted jail-break, inmates rioted and took over sections of the building. Gunfire was heard in the complex and inmates claimed to be holding hostage two Afghan national soldiers. The hostage-takers threatened to kill the captured soldiers unless mediators were sent in to resolve the conflict. As of 18 March the conflict remained unresolved and Afghan police and military were arriving in force in preparation to raid the prison.[8]

The United States has repeatedly announced that it will be shutting down its Guantanamo Bay detention camps, in Cuba.[3] The Americans planned to transfer most of the captives held in extrajudicial detention in Guantanamo, and in its less well known Bagram Theater internment facility to Afghan custody. United States President Bush negotiated a tentative deal with Afghan President Hamid Karzai that the Afghans would accept prisoners from the Americans if the Americans expanded and modernized Afghan facilities and trained, and paid the salaries of the additional Afghan guards that would be required.

The initial plan called for reducing the maximum number of men held per cell from the current eight, to just two.[3] For security reasons every cell would be equipped with its own toilet, replacing the current insecure method of letting all the captives leave their cells and share a single toilet at the end of each cell-block.

Under this initial plan the modernization of this wing would cost $20 million USD, and would have a maximum capacity of 670 captives.[3] However, after a tour of the facility, during its modernization, it was realized that, for cultural reason, captives could not be expected to share a toilet with another man. Afghan's cultural modesty would not allow a captive to use a toilet with another man present, cutting the capacity of the modernized facility in half.

On May 6, 2007, two American soldiers, Colonel James W. Harrison Jr. and Master Sergeant Wilberto Sabalu, part of the oversight team, were shot dead by one of the Afghan guards.[3] This forced a delay on construction as all the guards underwent new security checks.

Finally, there was controversy within the Afghan Cabinet as to which ministry would be responsible for the modernized part of the prison.[3]

In February 2009 a team from the United Kingdom's Channel 4 toured the American wing of the prison.[10]

By September 2009 the US had transferred some 250 former detainees from its Guantanamo Bay detention camp to Pul-e-Charkhi, often to the shock of their waiting families, according to Human Rights First (HRF).[4]