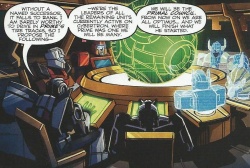 The Primal Council is an organization featured in Transformers: Dawn of the Predacus and the ruling body of the Autobots and Maximals following the death of Optimus Prime. It is presumably identical with the Maximal Council of Elders mentioned in Beast Wars and Beast Machines, and could be considered the same group as or a variation of the Convoy Council from Beast Wars Neo.

The Maximal Elders are mentioned by Megatron, who feels that the Predacon Alliance is humiliatingly subservient to them. Optimus Primal later stressed the importance of the Maximals holding the Ark until the council sent reinforcements, though Rhinox felt that any such reinforcements were long overdue. After taking over Cybertron, Megatron seized the Council Citadel as his palace, and later rebuilt part of the structure into his Grand Mal flying fortress; the Council were presumably among those who had their Sparks removed by Megatron during his conquest. It is likely that the Council were responsible for ordering the search for the Axalon in "The Probe," but they were not specifically mentioned as being involved; the Predacon generals Ramhorn, Cicadacon, and Sea Clamp later noted that they were forced to make "diplomatic repercussions" after the Axalon was presumed lost.

In Beast Wars Neo the Convoy Council gave Big Convoy his assignment to lead a crew of Maximals. One of these was known as Crow Convoy; another known as Grand Convoy was also depicted as supreme commander of the Maximal forces, though it is unknown what his relation to the council was.

In the Transformers: Universe comics, the Maximal Council of Elders was shown to be reformed with several additional members, who refused to believe Optimus Primal's claims that he had been revived by Primus to answer the renewed threat of Unicron.

In another reality, a version of the Primal Council consisted of several Convoys, with Autobot Reverse Convoy proving less egotistical than his Maximal compatriots.

After learning of Optimus Prime's death, the commanders of the remaining Autobot/Maximal combat units on Cybertron held a conference to determine the future of Cybertron. Prowl, feeling unqualified to succeed Optimus as leader, suggested that the commanders form the Primal Council as a governing body. The group determined to take advantage of Galvatron's recent death to hopefully force a Decepticon surrender, and dispatched several of its members to carry this out. They also dispatched Optimus Primal and the crew of the Axalon to investigate transwarp readings they had detected in the area of Unicron's head. Unit-3 subsequently reported that the rest of his unit, including Perceptor, had been wiped out, prompting the council to modify their contingency plan to include Unit-3 rather than the fallen Autobot scientist.

When a Decepticon/Predacon commander who dubbed himself Megatron refused to honor the Tripredacus Council's orders to cease fighting, the Council were forced to engage him head-on by forming Magnaboss. The Tripredacus Council then unleashed a transmatter wave on the planet that converted many of its inhabitants into protoforms, before covertly killing Predaking to bring an end to the fighting. The two councils then met to sign a peace treaty, and the protoformed beings were placed into stasis pods until a future date when they could be revived.

In Beast Wars: The Ascending, the Council of Elders-of whom only Prowl, Silverbolt, and Ironhide are mentioned-request Big Convoy's reports on the disturbances regarding Angolmois energy.

The Council appear briefly in Days of Wreckening, where they inform Depth Charge of their decision to declare the crews of both the Axalon and the Darkside dead. Depth Charge is furious, as he feels they haven't properly dealt with Protoform X, and storms out of his audience with them.