Philippa Charlotte "Pippa" Middleton (born 6 September 1983)[2][3] is an English socialite, author, columnist, and the younger sister of Catherine, Duchess of Cambridge. Middleton began receiving media attention with her appearance at her sister's wedding to Prince William, and has continued to do so for her fashion sense and personal relationships. 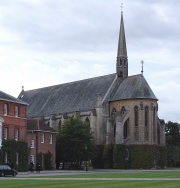 Pippa Middleton is the second of three children born to Michael Middleton, a former British Airways flight dispatcher, and Carole Middleton (née Goldsmith), a former flight attendant.[4][5][6] She was christened at St Andrew's Bradfield, Berkshire.[7] Her father's family came from Leeds, now in West Yorkshire,[8] and her paternal great-grandmother, Olive, belonged to the Lupton family who, according to the City of Leeds archives, were "woollen manufacturers and landed gentry; a business and political dynasty".[9][10] Carole Middleton's family are from London. Her ancestors worked as labourers and miners in County Durham.[11]

Middleton's father, Michael (b. 1949), had inherited large trust funds from his grandmother Olive Middleton.[12][13][14][15] These funds enabled the Middleton family tradition of both public schooling and university education to continue. Added to this wealth was his wife's success as a businesswoman. In the mid 1980s, when her two eldest children were at a nursery school and the family was in Bradfield Southend, Carole Middleton set up Party Pieces, a company that began by making party bags and went on to sell party supplies and decorations by mail order. By 1995, both of Middleton's parents were directors and managers of the firm which had become so successful that it had moved into a range of farm buildings at Ashampstead Common,[16][17] The company's success, along with the inherited Middleton wealth, has meant that Middleton's parents are reported to be millionaires.[18] While at Bradfield Southend, Middleton and her sister were members of the local St Andrew's Brownie pack.[19]

In 1995, the family moved to Bucklebury, Berkshire.[16][20] Like her sister, Middleton was first educated at St Andrew's School, Pangbourne and Downe House School, a girls' day and boarding school in Cold Ash. She attended Marlborough College on a sports/all-rounder scholarship.[21][22] Middleton then graduated from the University of Edinburgh with an English literature degree,[23] where she shared a house with Lord Edward Innes-Ker, a son of the Duke of Roxburghe, and with Earl Percy, heir apparent of the Duke of Northumberland.[23] By 2012, Middleton's parents were the owners of Bucklebury Manor, a Georgian mansion on an estate of some 18 acres. Middleton's nephew, Prince George, spent his first few weeks at Bucklebury Manor. [24]

Following her graduation, Middleton briefly worked in 2008 at a public relations firm promoting luxury products. She then took on an events management job with Table Talk, a company based in London that organises corporate events and parties.[21][25] Also in 2008, Tatler magazine named Middleton "the Number 1 Society Singleton", ahead of singer-songwriter James Blunt and Princess Eugenie of York,[26] although in the same Tatler article she was described as someone who "goes to a lot of parties, but mainly as the caterer." Since then, she has often been described as a socialite.[27] As part of a duo with her older sister, Middleton has received wide press coverage, focusing on her social life and her lifestyle.[28][29] In April 2012, Time magazine listed Middleton as one of the 100 most influential people in the world.[30]

Penguin Books paid Middleton a £400,000 advance for a book on party planning. The book, entitled Celebrate, was published in autumn 2012, and had lower than anticipated sales as many reviewers mocked it for the obviousness of its content.[32][33] Middleton said that she was not using a ghost writer.[34] In March 2013, Middleton parted from her literary agent.[35]

Middleton is also a regular columnist for several publications. She has contributed articles to The Spectator magazine since December 2012[36] and began having a food column in the supermarket magazine Waitrose Kitchen beginning in Spring 2013.[37] In June 2013 she was named a contributing editor of Vanity Fair writing a series of columns for the magazine.[38] Beginning in September 2013, Middleton also writes a fortnightly sports and social column for The Sunday Telegraph.[39] She parted ways from The Telegraph in May 2014.

The official announcement of her sister's engagement came on 16 November 2010. Middleton served as the maid of honour.[40] At the wedding, Middleton's white figure-hugging dress, which, like the bride's, was created by Sarah Burton of Alexander McQueen, was highly praised in the media. Made of ivory crêpe fabric, it was styled with a cowl at the front and organza-covered buttons at the back. Copies of the dress were soon available on High Street[41][42] where there was a great demand for them.[43][44][45]

Middleton's ancestors include her great great grandfather, politician Francis Martineau Lupton (1848-1921), whose first cousin, Sir Thomas Martineau, was reported in June 2014 as being the uncle of World War II Prime Minister Neville Chamberlain.[46][47] Other ancestors are Sir Thomas Fairfax (1475–1520), whose wife Anne Gascoigne was a descendant of King Edward III.[48][49] Ancestors through her maternal line include Sir Thomas Conyers, 9th Baronet (1731–1810), who was a descendant of Edward IV through his illegitimate daughter Elizabeth Plantaganet.[50] The Rev. Thomas Davis, a Church of England clergyman and hymn-writer, is also an ancestor; his granddaughter Olive Christiana Lupton being the paternal grandmother of Middleton's father, Michael.[51][52]

In William & Kate, a television movie released on 18 April 2011 about her sister's romance, the part of Middleton was played by Mary Elise Hayden.[53][54]