Orn Steelhide is a fictional character from the Mythic Legions series introduced in 2016. He is a heroic dwarf prince fighter in Xylona's Flock.

Prince Orn Steelhide is a fictional character in Mythic Legions series. He is a dwarf from Emberdale and loyal companion of queen Artemyss Silverchord. He is a prince in Xylona's Flock, an assembly of fighters who help protect the elements of nature that give life to the people of Mythoss. He enjoys hard drink and sometimes rides a giant wolf as a mount.

The Orn Steelhide toy was funded by the Mythic Legions Action Figures Kickstarter campaign in 2015. He was available for $45 by himself or as a $33 add-on for US backers.[1]

Orn Steelhide was the least sold figure in the Mythic Legions Kickstarter campaign.

Orn Steelhide was re-released as part of the first Mythic Legions All-Stars wave. 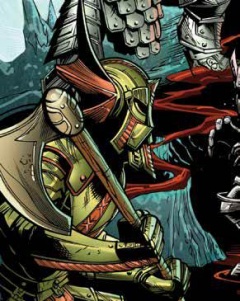 Hailing from the tiny Dwarven town of Emberdale, deep in the Greentop Forest, Prince Orn Steelhide stands tall even amongst this unusual tribe of Dwarves. Unlike other races of Dwarves, the Emberdellians are light-footed and often spend their time moving swiftly among the tree-tops. Joyful and light-hearted, Orn is equally as comfortable leading his comrades in a raucous Emberdellian folk song as he is leading them into battle.

Orn Steelhide first appeared in Mythic Legions Book 1. He was in attendance at Silverhorn Castle when assassins lead by Skapular the Cryptbreaker attacked. During the fight he smashed a Bog Goblin over the head with a mug. He swore to follow queen Artemyss Silverchord along side Otho and Asterionn in her quest to find out the truth behind the attack. A biography for Orn Steelhide also appeared in the book.

A 1:12 scale figure by Four Horsemen. The wings on the helmet were the first use of that part, but later seen in the Barbarian Builder Set. This figure uses many parts first used on other figures in the line, including the head and belt that was first used by the Bronze Dwarf and pauldrons first used by the Gold Knight. Comes with a spear, dagger, axe with an optional second blade and alternate bearded head.

A release of the figure in unpainted grey plastic.
Limited to 10 pieces.[3]