Opportunity Knocks Part 2 is a fictional story in the Transformers: Renegade Rhetoric series episode 58. Written in 2015, it retroactively took place in an unaired second season of the Challenge of the GoBots animated series.[1]

Cy-Kill returns with a number of new Renegades.

The following was first posted on the Renegade Rhetoric Facebook page on November 10th, 2015.

Question: Dear Cy-Kill, What is your home universal stream?

Cy-Kill: I hail from a place our scientists call Level 1, and I am quite pleased to have returned. You should have seen the look on Leader-1's face when I showed up in the middle of his assault on Rogue Star. It seemed that he had not been idle in my time away, pressing his advantage against my forces. As expected, Fitor comported himself well, but losing me was quite a blow to morale. Leader-1, no fool he, took advantage to assault my operations all over the galaxy, pushing my forces back. I imagine he thought this to be the final battle. Ha! 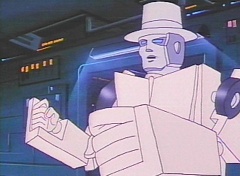 Stretch in Challenge of the GoBots

Instead, just as Courageous attempted to breach our hull, Gong opened a portal and I flew through with all of my new Renegades in tow. Monsterous immediately engaged Courageous. Odd Ball, Breez and Pow Wow ganged up on three new Guardian Academy graduates, Beamer, Sky Fly, and Guide Star. Clutch and Warpath rescued Stretch and Spoons, who were pinned down by Guardian fire. I, of course, immediately began blasting Guardian scum left and right. As for Gong, he was nowhere to be seen.

My unexpected reinforcements turned the tide in the battle. The Guardians attempted to retreat. I was having none of that, seeing the chance to end the war at one unexpected masterstroke. Courageous was disintegrated into its components, and Monsterous rampaged through the Guardian fleet of Command Centers virtually unopposed. Leader-1 jettisoned his damaged Power Suit and engaged me directly. The two of us flew through the carnage, me fully energized, him fatigued by battle. I though for certain this would be the time I finally best him once-and-for-all. But the accursed Guardian tricked me; as he paused, apparently exhausted, I channeled all of my firepower into one massive blast... which he dodged at the last second, allowing it to slam into Monsterous and shatter him into his component parts. Without my largest warrior, the Guardians were able to successfully retreat. But at least I have the satisfaction of knowing that we drove them off decisively. Tremble, Guardians, Cy-Kill has returned! Mwah ha ha ha ha!

Mathew Robert Ignash: Dear Uncle Cy, out of curiosity, which other Guardians were in the power suits and power ship that formed Courageous?

Mathew Robert Ignash: Dear Uncle Cy, as you know knowledge is power - can you tell us more about the new Guardian scum Beamer, Sky Fly and Guide Star? What are their strengths and weaknesses? Do you have any plans to take care of them? Which Renegades do you think would be most suited to take them out?

Cy-Kill: Snoop assembled a dossier on them for me. Sky Fly is probably the most threatening; as an intelligence officer, he seems more than competent. In jet mode, his telescopic lenses allow him to cruise at the upper limits of Earth's atmosphere and observe events below undetected. I would probably neutralize him with someone like Sky-Jack or, indeed, Snoop. My new recruit, Pow Wow, might be a good choice as well.

Beamer is yet another red sports car. Yawn. His weakness is his own impetuous nature. Were I so inclined, I would detail Stallion and Stinger to take him out once and for all. I would also like to see Breez take out some of his aggression on this huffy hot-rod.

Guide Star I am the least worried about. Another Guardian space shuttle, he detests violence in all its forms and prefers to use his knowledge of computers to serve Zeemon. Pathetic. Given where his talents lie, I would enjoy seeing Dr. Go outsmart him before allowing the unpredictable Odd Ball to rend him asunder.