Offroad Robo is a fictional character from the Machine Robo series. He is a heroic member of the Battle Clan who turns into a pickup truck.

Offroad Robo is a heroic Machine Robo of the Battle Clan who turns into pickup truck. Because of his mechanoid nature Offroad Robo does not need to breath oxygen and is resistant to cold, but is vulnerable to intense magnetic fields. His weapon of choice is his Ionoid Halogen Beam.

He turns into a Toyota Hilux pickup truck, the same alternate mode as the Transformers Hoist, Lift-Ticket and Trailbreaker.

Small Foot was number 10 among the "The Ten Best GoBots Ever Produced!" by Gnoll at dorkdroppings.com in 2015.[1] 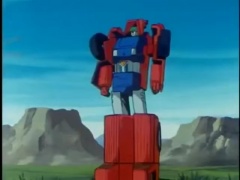 Offroad Robo is seen among the hypnotized population of the Cleo city in episode 21, "Angel of the Mind, Vikung-Fu - Protect".[3]

Offroad Robo appeared in episode 34, "Vikung-Fu Disappears In Space" working on the construction of the Battle Base.[6]

Offroad Robo appeared in episode 42, "Vikung-Fu - Cry of Anger" guarding the Battle Base.[7]

Bulldozer Robo, Cessna Robo, Offroad Robo and Trailer Robo appeared in episode 44, "Cronos' Last Battle", witnessing the destruction on the planet Cronos during the final battle with the Gandora.[8]

A new mold by Bandai. This toy was released as the GoBot Small Foot.