Of Rocks and RoGuns Part 2

Of Rocks and RoGuns Part 2 is a fictional story in the Transformers: Renegade Rhetoric series episode 44. Written in 2016, it retroactively took place in an unaired second season of the Challenge of the GoBots animated series.[1]

The conclusion of the RoGun adventure on Quartex.

The following was first posted on the Renegade Rhetoric Facebook page on January 6th, 2016.[2]

Cy-Kill: Marbles backed away from Slimestone, tripped, and fell down a short cliff. At the bottom, he found Boulder's Rock Pot vehicle. He wasted no time in hopping onto the marble machine and rolling away at its maximum speed of 150 mph, leaving Slimestone hurtling ineffective invectives after him. 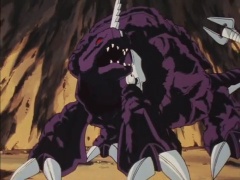 Pistol pleaded with Spike Stone, who didn't seem impressed with his prattling, when Boulder and his foolish followers appeared at the top of the canyon and started hurtling stones down at the beast. It bellowed and roared before converting to its compact boulder form to avoid the rain of debris hailing down upon it. They then formed a Rock Lord chain and pulled Pistol up. Boulder explained, with a brief flashback, that Shotgun had blasted the debris free the moment the Rockasaurus had departed. They immediately began traveling to Tower Tumbler, heedless of the danger. It's a wonder these so-call heroes manage to survive a single week, let along year after year.

In Clastixandria, Scope lay hands on the crystal and entered a virtual realm. He encountered an avatar of the computer system, and asked it why the Jewel Lords were imprisoned in what was supposed to be a place of learning it. It intoned that "the answer to your query lies thousands of years in the past. Once, Quartex was a peaceful center of philosophy and mathematics, home to the noble and wise race of Ro-Beings. These academics eschewed technology, preferring to be close to nature whenever possible. Sadly, their noble culture came to a premature end when a nearby star went nova. They detected the radiation wave when it was only days away from the planet. The council of elders met, and found only one solution. Every living being on the planet could be fused with rock at the instant the radiation wave hit. It was incredibly risky, but any other course would lead to certain destruction." Pistol asked what this had to do with the Jewel Lords, and it advised patience. "The process was, at best, haphazard, and the Rock Lords who had once been Ro-Beings had forgotten much of who they were. Clastixandria, too, was damaged, and unable to access much of its archives. There was a legend, an information fragment from before the calamity, that spoke of an artificial intelligence who could interface with the library and restore it to full operation. This being was to be the seed of the rebirth of the planet, a nugget from which the Ro-Beings of Quartex could one day reclaim their history. I waited patiently for thousands of years, and have come to realize that this AI too must have been damaged in the great metamorphosis. I have grown tired of waiting, and will restore myself. These Jewel Lords are to be part of my new computational matrix, even if it destroys them in the process... as will you!"

Meanwhile, in Magmar's camp, Squirt was happy to learn that Marbles had managed to elude Slimestone. He even had the temerity to laugh at his captor, prompting Magmar to send out additional hunting parties to track down the wayward Rock Lord.

Back in Clastixandria, the library's computer's assault on Pistol's mind commenced. Scope managed to use logic and reason to convince it to let him go, asking it how much the Jewel Lords had increased its computational abilities. When it replied, somewhat sadly, that the increase was negligible, Pistol pointed out that it would be better served to let them go with the promise that they seek the AI of legend. It did so, with Solitaire, Flamestone, and Sunstone agreeing to the computer's terms.

Marbles, who had been eluding Magmar's hunting parties, was discovered by Saberstone and Spearhead. He used the Rock Pot's conveyor belt to scoop up Spearhead, but Saberstone pulled him off the vehicle and started to pulverize him. Sadly, before she could finish the job, she was driven off by Boulder and his granite gang. After taking a moment to thank him for summoning aid, the now-reunited band of Rock Lords prepared their assault on Tumbler Tower. Though they were, naturally, dismayed at the strong fortifications inherent, they nonetheless drew up the best plan they could and prepared for a dawn assault. Perhaps they were foolishly driven by that misguided sense of honor and nobility so common to so-called "heroes". 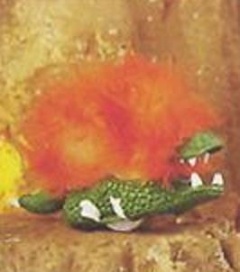 Scope and the three Jewel Lords fought their way through Narlibaboons and Narligators, and engaged Snarlie-Narlie outside of the castle Rifle was cowering in. The gigantic Narly was winning despite the four-to-one odds, until Scope snuck past him, combined with Rifle, and blasted the beast in the back. He never would have had to confidence to attempt such a maneuver before his experiences in Clastixandria. Before, he thought himself nothing without Rifle's shadow to hide in; now, he knew that, though he was part of a powerful partnership, he was also a fully-realized RoGun in his own right.

Boulder's group, along with Shotgun and Pistol, surrounded the tower and blazed away. Magmar laughed off the attack, firing his guns from behind cover and damaging each of his attackers. The inevitable reinforcements of Rifle, Scope, and the Jewel Lords only delayed the inevitable, and soon all of his enemies lay at his feet. He and his Rock Lord minions emerged from the safety of their tower to gloat, a costly mistake. I will admit I winced a bit when I read that bit; it hit a little close to home. Squirt's cell had become damaged during the assault, and he freed himself during the melee. He tricked Tombstone, the lone guard inside the compound, into following him back into his cell, then dodged through his legs and locked him in. He then turned the full power of Tumbler Tower against Magmar and his cohorts. Rather than get shaken to pieces, they withdrew. 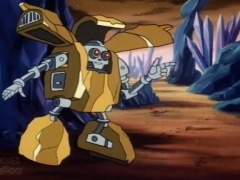 Nuggit in GoBots: Battle of the Rock Lords

Boulder and Solitare agreed that mastery of Tectonics was too potent for any single Rock Lord to control, and they destroyed Magmar's maleficent monument. They thanked the Ro-Guns for their help, and bid them adieu. Boulder and Solitare wondered where they could find the mysterious AI that was the key to restoring the knowledge of the Ro-Beings, prompting Nuggit to add they he certainly hoped they could locate it soon.

Yes, the whole thing was exactly as cloying as it reads. It made me glad my forces were occupied elsewhere. Magmar may be a mineral moron, but if forced to choose between him and a "noble" nitwit like Boulder, I know exactly where my sympathies lie.