Of Rocks and RoGuns Part 1

Of Rocks and RoGuns Part 1 is a fictional story in the Transformers: Renegade Rhetoric series episode 43. Written in 2016, it retroactively took place in an unaired second season of the Challenge of the GoBots animated series.[1]

When the Rock Lords call for help the Roguns have an adventure on Quartex which beings them into conflict with the evil Rock Narlies.

The following was first posted on the Renegade Rhetoric Facebook page on January 5th, 2016.[2]

Question: Did you ever encounter the RoGuns again after their Martian adventure?

Cy-Kill: Oh, they popped up here and there, but not in any kind of decisive way in any of the conflicts between Guardian and Renegade. Although, my ever-vigilant spy Snoop recently intercepted a number of Guardian documents, one of which tells the tale of the RoGuns' voyage to Quartex, and how they became something of a thorn in that dolt Magmar's side. 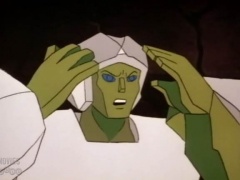 Marbles in GoBots: Battle of the Rock Lords

It started with Boulder's tribe of granite goody-two-shoes learning that there was a young rock trapped by a cave-in, deep in an underground mine shafts. Those dolts marched like lemmings right where Magmar wanted them, then acted surprised when their enemies sealed them away by collapsing the tunnels. Only the cristobalite psychic Marbles, warned by a vision of impending doom, managed to elude the trap. He used the Trans-Galactic Modem the Guardians had left behind to beg for assistance. The Guardians were far too busy dealing with my own malevolent machinations to send help, but Rifle and his other RoGuns interlopers borrowed a Command Center and decided to intervene.

The RoGuns linked up with Marbles, who was relieved to see them. When Scope asked why they couldn't get assistance from Solitaire and her Jewel Lords, he told them that the Jewel Lords had been lost for weeks, having disappeared while seeking the legendary lost library of Clastixandria. Rifle opted to split their forces. Marbles and Squirt would attempt to discover what Magmar had been up to and delay him if possible. Shotgun and Pistol were to set off to rescue Boulders band of pinhead pebbles. Rifle and his parasitic partner Scope were to journey to the petrified city of Pyroxentopia in search of the Jewel Lords.

Marbles and Squirt soon learned of Magmar's newest plan... to seize control of the tectonics of Quartex with the massive Tower Tumbler. In doing so, though, they fell under the observation of the delightfully disgusting Slimestone. The shameless silver sleaze gathered up Sticks 'N Stones and ran down the simpering scouts. Marbles converted to his rock form and rolled away, Slimestone in pursuit; Squirt was nabbed by the two-headed anthracite/magnetite monstrosity and dragged back to Magmar's tower. 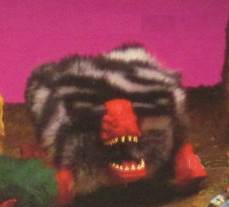 Rifle and Scope encountered Snarlie-Narlie, the enormous king of the evil Rock Narlies. Rifle found himself gored by the massive Narlibull and retreated into an ancient castle, which was able to keep out the prowling Narlilions and flying Narlibats... barely. He nervously bided his time as the Rock Narlies snapped at him through barred windows. Meanwhile, in eluding his gnarly pursuer, Scope looked up in stupefied wonder at the rows upon rows of books and archival crystals arrayed before him amidst splendid columns and buttresses; in his panic, he had stumbled upon Clastixandria. He wandered about for a moment before encountering the comatose forms of the Jewel Lords, hooked into an ominously pulsating crystal!

Marbles found himself backed into a corner by Slimestone, with the latter advancing menacingly with his slimegun...

Shotgun and Pistol found the cave-in, only to find it guarded by the rockasaur Spike Stone. The massive horned beast drove them off, initially. They hatched a simple plan; Pistol was to act as bait to lure the tachylyte triceratops away, while Shotgun would free the others. It was trivially easy for Pistol to get the beast's attention, but he soon found himself cornered in a box canyon, and the end seemed to be nigh!

Christopher Colgin: Oh, do tell what happened next! This story...rocks!

Cy-Kill: UUuuuuuuuggggghhhh. Keep this up and I shall grind you to powder.

Christopher Colgin: Sorry. I didn't mean to erode your patience.

Christopher Colgin: My deepest apologies. The last thing I intend to do is gravel you, my lord.

Cy-Kill: That's it. It's been gneiss knowing you! <Charges blaster>

Cy-Kill: I was confident you would cave eventually.