From WikiAlpha
Jump to: navigation, search
For other uses, see Obsidian.

Obsidian is the name of several fictional characters from the Transformers series. The first Obsidian is an Autobot general turned Vehicon introduced in 2000.

Obsidian is a fictional character who first appeared as part of the Beast Machines Transformers series. The biography on his original toy depicted him as a mindless drone created by Megatron, but all later depictions in fiction have portrayed him as a great general and cunning commander.

Beast Machines: Obsidian was created to be a mindless aerial-attack automaton by Megatron, master of the Vehicons. Armed with several heat-seeking missiles capable of penetrating 800 meters underground to reach their Maximal targets. While airborne, plays symphonic scores for enhanced drama and psychological intimidation. Expert in low-flying aerial combat. Often supports tank drone battalions for supreme land / aerial assaults. Displays unmatched aggression while in battle, but becomes docile outside of combat. Will hover serenely for hours.

Machine Wars: Obsidian has a cunning mind adept at forming the most brilliant battlefield strategies. For the longest of time, he stayed in the shadows carefully formulating the countermeasures that would enable the Autobots to wrest control of Cybertron away from Shockwave and Megatron. After Unicron's attack in the year 2005, Obsidian led the Autobot forces who expelled the remaining Decepticons from the planet. Since becoming a more public figure, he has led many successful campaigns against Decepticon incursions of Cybertron and has been decorated with the highest military honors. While Obsidian's best-known weapon is his mind, he is also well trained in many forms of combat. He is a student of not just the history of the Cybertronian wars, but those of Earth and Nebulos as well. He even recently took a modified P-38 Lightening Earth plane as his alternate mode. He is an expert in low altitude aerial combat, and is capable of shelling the battlefields below with machine gun fire and ground penetrating missiles while also engaging enemy flyers in tremendous dogfights. In robot mode, Obsidian is skilled at Kratomechafora which allows a combatant to use an opponent's own physical strength against himself.

Obsidian is a legendary Cybertronian general who scored countless victories alongside his consort Strika. According to the Maximals in the episode "Sparkwar" they fought a thousand wars and won them all. The two were captured by Megatron, along with the entire population of Cybertron, who then eventually placed their sparks in Vehicon bodies. Obsidian became a helicopter, leading the aerial forces in place of the fallen Jetstorm.

They first appeared in the episode "Sparkwar Part 1", where they immediately made an impact. Pretending to be dim and fairly weak, a'la Tankor, the two lured the Maximals into a trap, cutting off their every option with countless numbers of new Vehicon Drones. Cornering them underground, the Maximals only escaped due to Botanica's intervention.

Unlike the previous generation of Vehicon generals (Tankor, Jetstorm and Thrust), both Obsidian and Strika weren't given alternate personalities. They remained who they had always been. However, their prime directive was the protection of Cybertron, and they had been programmed to perceive Megatron and Cybertron as one and the same. To defend one was to defend the other. Unlike the previous Generals, Obsidian was willing to take the responsibilities of his own failures, making him perhaps the most honest of the Vehicon Generals. Obsidian and Strika were the first vehicons to address Megatron as "Lord Megatron"

Obsidian proved himself to be a tactical genius on the battlefield, given his history as a supreme general. Despite his military brilliance, he was at a loss when without a certain directive. When Megatron was seemingly destroyed, he and Strika joined the Maximals, since their options had become limited. This alliance would turn out brief though, for when Megatron returned in the body of a Diagnostic Drone, Obsidian and Strika immediately return to his side.

In the final battle with the Maximals, Obsidian and Strika were tricked into standing on an antigravity unit by Cheetor, who launched the pair into space, where neither were affected by the reformatting of Cybertron.

According to an F.A.Q. on Bob Skir's web site there was a scene with Obsidian and Strika cut from the final episode. "Obsidian and Strika had a MAGNIFICENT scene in which they return to Cybertron and decline an offer to be reformatted themselves (partly because they feel unworthy because of their role helping Megatron, and party because I wanted them to remain "pure" when I brought them back in the next series... which (as of this writing) I haven't been invited onto yet. Sadly, their finale got cut for time."

Obsidian appears in the 2013 Transformers: Timelines story Termination, where he assigned several Autobots as city commanders.[1]

Five days before Jhiaxus’s invasion of Cybertron, Pyro and Obsidian conversed over video transmissions. Obsidian learned that the Sandstorm that was helping him was actually a double, as the real Sandstorm was currently with Pyro. Obsidian then took the time to plant a serro-gyro mekarach on the clone, which would later activate itself during the battle to come. Facing off against a squad of Sandstorm drones, Obsidian and Strika declared to the onlooking Jhiaxus that they would fight him to the bitter end. With Jhiaxus unwilling to let up his invasion, Obsidian engaged the enemy, slicing in half a nearby drone. The whole battlefield then lit up with laser blasts, and Obsidian and his cohort pressed on in their defending of their home world.

A new mold. Turns from robot to Cybertronian helicopter. The on-box biography for Obsidian depicts him as a simple drone, not a sentient being. In Japan it was recolored as Beast Wars Returns Obsidian with show accurate colors. 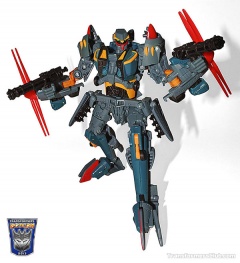 A remold and recolor of Hunt for the Decepticons Highbrow. A Botcon 2013 exclusive.

Though not featured in the Robots in Disguise animated series, Obsidian did later receive storyline in the universe from "Ask Vector Prime." Here he was a member of Jhiaxus' Destructicons, a former Autobot who turned against his allies and sided with the enemy. He also had a rivalry with Thrust, though they made an effective team in battles with the Elite Guard. [2]

A recolor of Beast Machines Obsidian.

A new character named Obsidian was introduced in the Kre-O line as Combiner made up of four dinosaur Transformers who was associated with Volcanicon; he was briefly known by the name Firewing. He was featured in an "Ask Vector Prime" plotline as the twin of Volcanicon, both of them joining Violenjiger's Thirteen Great Demon Generals in a bid to avenge their home planet of Dinosaur. [3]