This quartet has an independence streak that runs as long as the Appalachian Trail. Experts at covert operations. Always work well together in any combat situation. Specialize in going where no one's ever gone and doing what no one's ever done. Continually caught up in some sort of enemy intrigue. Autobot Command trusts them to come up with brilliant counter-measures to be sprung on the Decepticons.

Mudslinger was among the Micromasters who appeared in Spotlight: Hardhead and attacked Nightbeat and Hardhead on the planet Gorlam Prime.[1] 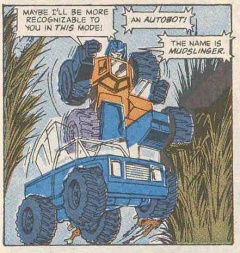 Mudslinger The Transformers by Marvel Comics

The Micromaster Off Road Patrol first appeared in issue #54 of the Marvel Transformers comic in a story called "King Con!" In this story Optimus Prime and Hi-Q receive reinforcements from Cybertron in the form of the Micromaster Race Car and Off Road Patrols. The Off Road Patrol is sent to investigate a monster sighting in New Jersey and discover the Decepticon Pretenders Skullgrin and Iguanus. The two patrols eventually ruin the Decepticon's plans and decide to stay in New York City.[2]

Four original molds sold only as a set. Mudslinger was recolored into the Decepticon Greasepit.

There was a time when Mudslinger might have considered joining the Autobots, but that was long ago. He's a robot of action, with no time for things like thinking, negotiating or peace. In his opinion, the Autobots are a bunch of sissies. With his team in tow he's got the power to prove just how much tougher than them he is.

A new mold. Comes with four Destructicon drones - all of which combine with Mudslinger to form a larger robot.[3] Mudslinger was recolored into the Autobot Salvage.