He was accused of traveling to Afghanistan, with the aid of the country's government, in March 2001 to help quell the tribal wars that were ongoing. He was billeted at the Embassy in Pakistan, and given training at the Omar Sa'if Center where he served as a guard.

He was one of dozens of detainees whose detention in the camps was partially justified by the allegation that they had owned a Casio F91W wristwatch, which American intelligence asserted could be used in the manufacture of explosives. He was eventually cleared to be released, in 2005.

Mohammed Ahmed Ali al Asadi was repatriated to Yemen without ever been charged on December 15, 2006.[2] 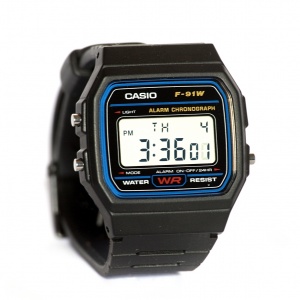 A Summary of Evidence memo was prepared for Mohammed Ahmed Ali Al Asadi's Administrative Review Board, on 19 April 2005.[6] The memo listed factors for and against his continued detention.

The detainee was issued a Kalashnikov at the "AMR" center.

Yemen's President, Ali Abdullah Saleh, demanded the release of the remaining Yemenis held in Guantanamo on December 23, 2006.[10] The Yemen Observer identified Al Asadi, Esam Hamid al-Jaefi and Ali Hussain al-Tais as three of the six Yemeni who had been repatriated the previous week.

Al Asadi said he was the first of the six men to be released because there were no charges or evidence against him.[11] Yemen's President, Ali Abdullah Saleh, said the men would be released as soon as Yemeni authorities had cleared them. Al Asadi was asked to sign an undertaking promising to refrain from armed activity. Al Asadi announced: "Now, I'm going to start a normal life, to find a job, to get married, and generally settle down,"

Reports of a new hunger strike

Asadi reported that the Guantanamo captives had initiated a new hunger strike in early December 2006.[12][13] According to the Gulf News Asadi listed the following triggers for the hunger strike: