From WikiAlpha
Jump to: navigation, search
For other uses, see Ray.

Max Ray is a fictional character from the Centurions series in 1986. He was voiced by Pat Fraley.

Unrivaled for his skills in the water, Max is a member of the most formidable fighting force team, the Centurions. Being level-headed and a good strategist, he plans well-coordinated attacks. As a college student at age 14, Max built his own nuclear powered submarine. Max Ray the only person ever to water ski across the Atlantic Ocean. For exercise, he regularly swims from California to Hawaii and back.

Depth Charger could be used to travel over snow by using it's pontoons as skis.

He has used Ace's Skyknight when Ace was out of commission.

According to the toy designers Max Ray was based on Tom Selleck.[1]

In the second year of the toy line new Assault Weapons Systems for Max were designed. These included the Sea Bat and Aqua-Blazer. The line was canceled before the Aqua-Blazer was released.

Max Ray was one of the main characters of The Centurions animated series, and appeared in every episode. 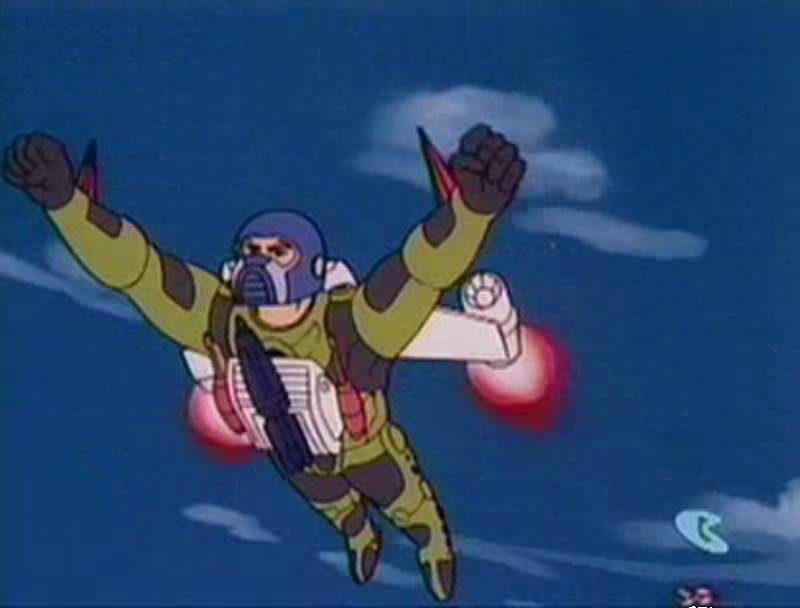 In episode 54, "To Dare Dominion Part 1", Max used the Skyknight weapon system during a time that Ace was injured and the team needed air support.

In the DC Comics Centurions story "Time Bomb" Doc Terror attempted to trick the Centurions by having them take a bomb, disguised as a recovered a cyborg Eskimo, to Sky Vault. Terror attempted to distract the Centurions by having them chase three fake missiles across the globe. Ace McCloud beamed to China where he fought a flying aircraft carrier full of Strafers. Jake Rockwell beamed to Africa where he fought a robot duplicate of Hacker. Max Ray followed a missile to Lake Michigan. Eventually Max Ray saw through this trick at the last moment and beamed the Eskimo into deep space before he exploded. In this story Max used Tidal Blast and Depth Charger weapon systems.[2]

Comes with Max Ray and Cruiser.
Max can combine with any of the Assault Weapons systems, but in fiction is usually depicted with the systems designed for him. One time he did use Skyknight when a Ace was injured and Max had to fill in on a flying mission.
Cruiser has been depicted in fiction combining with the Aqua-Blazer and Power Pack.
Some early prototype pictures of the Rex Charger figure were actually repainted Max Ray figures with a new head.

Sea Bat and Swingshot were the only second wave of Centurions toys to be released.