Lobclaw is a Decepticon in the Transformers franchise who shares his body type with Nautilator, who like Lobclaw is also part of the Seacons faction. 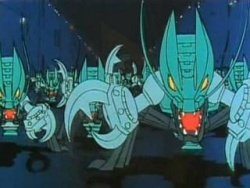 Lobclaw drones as seen in Masterforce.

Like many of the other Seacon molds, Lobclaw was featured as part of a force of Decepticon drones in Transformers: Super-God Masterforce under the leadership of Turtler, who could use Lobclaw and the other Seacon drones as limbs to form King Poseidon.