From WikiAlpha
Jump to: navigation, search
For other uses, see Landshark.

Landshark is a fictional character from the Transformers series. He was created in 2009 as an exclusive to the Botcon Transformers convention. He is the pilot of the Autobot Elite Guard Alpha Team, which is lead by Thunderclash. 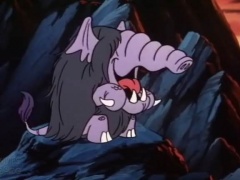 Landshark is able to transform his auxiliary battle platform into a hydraulic booster pack which wields two power claws. This feature also gives him the ability to cling onto or climb almost any structure. According to his official biography he once fought a deadly Narliphant.

In Wings of Honor by Fun Publications he was a member of the crew of the Autobot ship Eight Track under the command of Thunderclash.[1][2]

In The Coming Storm Kup is ordered by Landshark to move some boxes with the Autobot Elite Guard logo on them. The Elite Guard Alpha Team and Strike Team did battle against a horde of ferrovorous bugs in one of Cybertron's city-states. Magnum then ordered the Strike Team to escort the Alpha Team to Space Port Bravo for their next mission. The Strike Team then reported to Magnum and Sentinel Major, who introduced them to the new Elite Guard Special-Ops Team, also called the Combaticons.[3][4][5]

In Battle Lines Thunderclash's Elite Guard squad reported to Magnum after the Combaticons killed most of the Guard. They attempted to show the Council that the Elite Guard was still functional, but arrived just as Optimus Prime was appointed the new commander of the Autobots. [6]

A recolor of Energon Landmine, this toy is a Botcon 2009 exclusive.[7]