Landquake is the name to two different fictional characters from the Transformers series. Both are portrayed as heroic characters.

In the animated series, Landmine was evolved by Primus into a new form. In Japan, this was an upgrade which was reflected in the show, where he was called Landmine Supermode. However, the U.S. release of this toy was named Landquake and was portrayed as a new character, Landmine's brother. In the Dreamwave comics fiction Landquake is Landmine's brother as well.

This incredibly powerful Autobot possesses a physical design similar to his brother, Landmine. Unlike Landmine, Landquake does not enjoy one-to-one scrapes with Decepticon enemies. He believes that fighting is a waste of time. Instead, he prefers to help the Omnicons mine energon. During many excavations, Landquake has used his powerful fists to crack open energon-rich rock deposits in extreme climates like the Arctic. When there is a call to battle, however, he will not hesitate to use his brute strength to thwart an enemy attack. Many Decepticon have learned that angering this gentle giant can prove to be a ground-shaking error.

In the Energon comic series by Dreamwave comics Landquake was Landmine's brother. He appeared in issues 27-29 of the series. He originally appeared as part of the Autobot reinforcements under Jetfire who headed to Earth to fend off the Terrorcon invasion. Landquake was part of the team who travelled to Los Angeles to battle the Insecticon clones, alongside Perceptor, Cliffjumper, Bulkhead and Tow-Line. They were in danger of being overwhelmed by the sheer number of clones until they were rescued by a surprising source - Megatron, resurrected in a new body by Optimus Prime. Megatron decimated the Insecticon clones, leaving the Autobots to help with the devastation.

Landquake is a recolor of Energon Landmine. He comes with one missile.[1]

Landquake's biography painted him as one of the oldest serving Decepticons since the beginning of the Autobot/Decepticon war. However, he became disillusioned with Megatron, believing his leader's ego was doing more harm than the Autobots. Throwing in with the Decepticons as he believed he had a greater purpose in life than being a simple Energon analyst, self-doubt about the Decepticon cause has begun to creep in, and he now serves with little true conviction. He combines with the other 4 Transformers Collectors Club membership combiner exclusives to form Nexus Prime.[2] 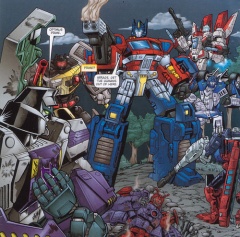 Landquake made his first fictional appearance in the Hasbro Club Collector's Comic, distributed through their newsletter. He appeared in the four part "Revelations" arc, set during a Mini-Con civil war, helping the Decepticon aligned faction to build a deadly weapon to destroy the Mini-Con High Council. The High Council sent Sentinel Maximus and Skyfall to stop them. Although Landquake and Skyfall battled, the two quickly realized they felt a kinship of sorts and formed a loose partnership. When Unicron attacked, the two combined their shielding to help stop him and his servant Soundwave. However, the energy released was too much, and a massive explosion knocked the two into another dimension. Getting their bearings, the two encountered another incarnation of Megatron, who threatened to kill them.[3]

In "Crossing Over" Landquake ended allying himself with the new Megatron he met, although he was held in suspicion by the Deception leader. After examining Landquake the Decepticons learned his story may be true, and then detected a similar energy source to that detected at Landquake's arrival in South America. Skyfall allied himself with the Autobots and they arrived at the same time to investigate the energy. Skyfall and Landquake and the Autobot Cliffjumper (assigned by Optimus Prime to watch Skyfall) arrived in the underground energon pool together and met the Autobot Breakaway, who was guarding the pool, but had little memory of why. Together the three Transformers who seemed to feel they were connected, and Cliffjumper who refused to leave Skyfall, were sent through a dimensional portal by Breakaway's Caretaker computer to find their "fourth".

In "Transcendent" Breakaway, Landquake and Skyfall arrived on a parallel Transtech Cybertron, in the city of Axiom Nexus. They were greeted by that world's Cheetor and Silverbolt, and were worried that Cliffjumper has gone missing. The arrivals were told that they were among many to arrive on this world and are brought to "processing." After processing the three Autobots were greeted by the ancient Autobot Alpha Trion and taught in the ways of outworlders in Axiom Nexus. Breakaway was then abducted by Transtech Shockwave. Joining with Alpha Trion's group they raided Shockwave's lab and recovered Breakaway, then escaped to his homeworld through a dimensional portal.[4] Just before leaving Alpha Trion stabbed Skyfall through the chest with his sword.

In "Reunification" the escapees returned to Alpha Trion's lab, where they were joined by several Autobots and Decepticons from his home world that were loyal to him. Alpha Trion's killed the Autobot Downshift, who discovered their lair. Although Alpha Trion claimed that Skyfall was shot in the escape by the Transtechs Breakaway noticed that the wound was cause by a blade like Alpha Trions. Alpha Trion then ordered his forces to restrain Breakaway, Landquake and Topspin.

Unrelated to the Energon character of the same name, Landquake; 2006's Transformers Club exclusive toy is a Decepticon (a repaint of the Energon Destructicon tank Kickback/Blight) who is able to combine with others club exclusive figures (including the Autobot Skyfall) to form Nexus Prime. This toy's alternate mode is a 1/77 scale Gepard tank.