Kraken is a type of Decepticon drone in the Transformers franchise who shares his form with the Seacon Seawing. 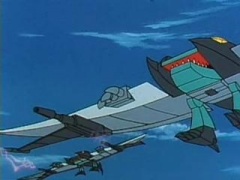 Kraken drones appeared as part of the Decepticon forces in Transformers: Super-God Masterforce, attacking various locations at the behest of their masters. They could also join in forming King Poseidon, a massive robot consisting of four other types of Seacon drones and their leader Turtler.

A new toy that is identical to Generation 1 Seawing. Turns from humanoid robot to manta ray.

A set of replacement labels for the Generation 1 Seacons.[1]