Kenpo Robo is a fictional character from the Machine Robo series. He is a heroic Cronos Clan member introduced in 1986.

Kenpo Robo is a heroic mechanoid from the Cronos Clan. Because of his mechanoid nature, he does not need to breath oxygen. He probably knows Kenpo martial arts.

He has used the Dragon Helmet, which heals any wounds of the wearer. Kenpo Robo has been known to use a personal tank and Power Riser vehile. 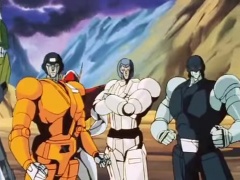 Kenpo Robo first appeared in Machine Robo: Revenge of Cronos episode 30 "Spew Fire, Big Blaze Cannon" where he was part of a group lead by Kendo Robo who aided Rom Stol against the Gandora.[1]

In episode 33, "The Lost Ruin - Four Secrets!", Kendo Robo discovers the Dragon Helmet in a ruin.[2]

Note: The animation model of Kenpo Robo colors his head black, but the toy had a gray head. He never used his drill tank in the series. In some English subtitles of the series he is called West Sword.

A new mold. Comes with a backpack that turns into a drill tank that Kenpo Robo can fit inside. Kenpo has a Japanese manji symbol for luck (looking like a counterclockwise swastika) on his chest and the Japanese symbols "拳" meaning "fist" on each leg.

A release of Kenpo Robo for the Machine Robo: Battle Hackers line, this time with a Power Riser armor.