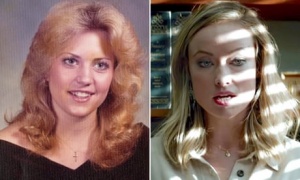 Kathy Scruggs was an American journalist, based in Atlanta, Georgia, best known for her role in the case of hero Richard Jewell.[2][3][4][5][6][7] While commentators agree Scruggs was a beautiful woman, with a strong personality, her defenders assert media portrayals of her have obscured her genuine professionalism and dedication, with an undue focus on her lovelife.

Scruggs was born in Athens, Georgia. Her father, who had trained as a GI reporter during World War 2, was a senior executive in the Insurance Industry.[8] She earned a degree at Queen's College in Charlotte, North Carolina, before entering journalism herself.

Scruggs worked at two other publications before she spent most of her career at the The Atlanta Journal Constitution, on its Police beat.[8]

Scruggs and colleague Ron Martz broke the story that the FBI were investigating Jewell as a suspect in a deadly bombing at the 1996 Atlanta Olympics.[9][10][11] Jewell was a security guard at an Olympic event and initial reports describe him noticing a suspicious package and taking key steps to clearing potential victims from the area, saving lives.[12] However, Scruggs ran with a leak that the FBI's main suspect was Jewell, based on the theory he set up the bombing specifically so he would be regarded as a hero.

Other reporters surrounded Jewell's home, and he lived under a cloud of suspicion for years - until the real bomber was found, after he was caught for another crime.[12] The real bomber, Eric Robert Rudolph, had been an anti-abortion kook, and protesting abortion had been his motive. Jewell had been a hero, all along.

After he was cleared Jewell sued. Scruggs faced jail if she did not reveal her source. Scruggs refused, and appealed the jail term. While her appeal was in process she was found dead of a drug overdose.[9]

Controversy over media portrayals of Scruggs

In a 2013 profile of her Doug Monroe, who had been a colleague of hers, at The Atlanta Journal, described her a hard-drinking, hard-partying, risk-taking crime reporter that the Police loved.[9] Monroe described her going to the scene of a murder, and arriving before the Police, only to ask them what had taken them so long, to arrive.

In 2019 two movies about Jewell were released, with Scruggs portrayed by Carla Gugino and Olivia Wilde.[13][14][14][1][15][16] Those films portrayals of the role Scruggs love-life played in her reporting was a source of controversy. Richard Jewell, directed by Clint Eastwood, was the target of more criticism Critics say that film shows Scruggs being offered a tip-off that the FBI was investigating Jewell as the possible bomber from an FBI agent with whom she was having sexual relations.[9] Scruggs colleagues, at The Atlanta Journal Constitution assert Scruggs was too professional to have ever used her sexuality this way. Doug Monroe, one of those colleagues, acknowledged that Scruggs's relationships had been subject to reporting, but that none of her lovers had ever been the source for a story.

Commentators said that her role in Manhunt: Deadly Games was more nuanced.[10]

Colleagues say questions over her role in the demonizing of Jewell troubled her in her final years. She took medical leave in 2000, and, on September 2, 2001, she passed away from an overdose, at the age of 42. Sources differ on the details of the overdose. Many say she died from an overdose of drugs she had been legally prescribed. Other sources say the drugs were opiates, or, explicitly, morphine. The capture of the real bomber, which finally cleared Jewell of lingering suspicion, didn't take place until 2003. Jewell himself passed away in 2007.