Jason Fernandes is an Indian blockchain entrepreneur and technology columnist. Fernandes founded the internet portal ZeoCities.com as a student, the non-profit LDKids.org, and wrote for Intelligent Computing CHIP magazine (India).[1]

Jason Fernandes was born to the artists Thomas and Jeanette Fernandes in Bombay (now known as Mumbai). When he was diagnosed with dyslexia, Fernandes was a teenager. He then had access to the family computer, which began his journey into technology.[2]

In 1998, Fernandes acquired his first domain on his website, www.jasonsoftware.com, which later became ZeoCities.com: a free email, website, search engine, news, and chat web portal. He also became a writer and technology troubleshooter for CHIP Magazine (christened Dr. Chip), one of India's most widely read computer publications. In 1999, as a way to help people better understand dyslexia, dysgraphia, dyscalculia, Attention deficit hyperactivity disorder, and other learning disorders, Fernandes founded Learning Disabled Kids, a non-profit website. He was awarded the Childnet International Award (UK) for this in 1999.[2]

Fernandes moved to study at the University of Texas, Austin, in the United States. While studying there, he was one of the founding members of RecordTV.com (now known as InstantTV), where he holds a Network DVR patent; he was also part of PerceptiveI's founding team, a group that created proprietary customer ECRM software.

After completing his education, Fernandes moved back to India, residing in Goa. He then started working as a technology columnist for Indonesia’s GlobeAsia Magazine. Over the years, his writings have appeared in The Jakarta Globe, Intelligent Computing CHIP magazine (India), Daily News and Analysis, The Goan and Man's World (magazine) among others.

Fernandes helped develop SmartKlock, a "smart" clock that gave its users only important notifications. For this product, he ran a Kickstarter [3] campaign. Eager to hear more opinions on it, he wrote to Steve Wozniak in September 2014. Wozniak replied with an encouraging note and an autographed photograph of the Apple Inc. co-founders sitting with the Apple I prototype. This venture slowly grew into FUNL Corp, which offers an app designed to block out unnecessary notifications, with a reward-based system (working on blockchain). Along with Vadim Fedotov and Gene Hoffman, Fernandes also co-founded Malta-based AET Ventures (AEToken).

Fernandes has advised the country of Barbados, the Government of Goa, and multiple Goan political parties on IT and Education policy. He was a speaker at TEDxPanaji in 2017, keynote speaker at the International Blockchain Congress, and has been a featured speaker at events hosted by the Computer Society of India, Goa Chamber of Commerce and Industry (GCCI), Goa University, BITS Pilani University, Goa Engineering College and 91Springboard.

Fernandes later co-invented the internet-based DVR, InstantTV, while studying at the University of Texas at Austin, and was part of the PerceptiveI founding team (a company that developed ECRM software). Fernandes started working for GlobeAsia News, Indonesia, as a monthly technology columnist after moving to Goa in 2012.

He also founded SmartKlock Inc, an IoT corporation, and two Blockchain firms, FUNL Corp, and AET Ventures (AEToken), based in Malta, of which he is currently the COO. On IT and education policies, Fernandes has consulted state governments and political parties.

In November 2017, Fernandes founded blockchain startup FUNL Corp, a platform that “filters notifications using a social blocking approach making real-time intelligent decisions on whether to block or let a notification through to your phone based on data executed from other users”. Later, Fernandes co-founded a blockchain-based payment solution for the affiliate marketing industry (built on the Ethereum blockchain as a side chain), called Affiliate Economy Token or AEToken.

In October 2018, AEToken won the competition for the best ICO pitch at the Malta Blockchain Summit.[4][5] Fernandes often speaks on the subjects of cryptocurrency and blockchain at conferences and seminars. He has spoken at the following events: Keynote speaker at a Blockchain seminar at Padre Conceicao College of Engineering (PCCE)[6] in 2018.

In December 2018, Fernandes became a biweekly guest on Malta’s BloxliveTV, in his opinion on cryptocurrency. He has since appeared on their "Crypto Now" and the "New On The Block" shows. In March 2019, they profiled Fernandes on their show "Be Influenced", which highlights people in the blockchain industry. 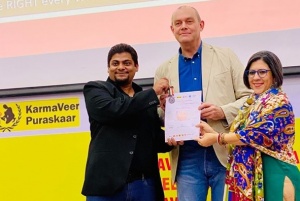