From WikiAlpha
Jump to: navigation, search
For other uses, see Icebird.

Icebird is a fictional character from the Transformers series. He is a Mutant Transformer introduced in 2000 that turns from bear to owl and he commands the Mutants faction.

A character named Icebird was released as part of the Beast Wars Mutants sub-line in 2000.

As a Mutant, Icebird transforms from owl to polar bear, with no robot mode. He possessed colossal size and strength in bear mode, while is silent in owl mode. Can communicate telepathically, become invisible, read minds and shut down machinery at will.[1]

Icebird's stasis pod was among those who were launched into orbit around prehistoric Earth in the Beast Wars series pilot.[2]

In Transformers: Universe - The Wreckers the Mutants traveled to Cybertron and sought the guidance of the Oracle computer, seeking a cure for their condition. What they didn't know is that the Oracle was under the influence of the Quintessons. The Mutants were sent to the outer Orion Cluster. Once there they were captured by the Quintessons, found in contempt by the five-faced aliens, and destroyed in an attack by a swarm of Sharkticons.

In Wreckers: Finale Part II Icebird and Poison Bite were revealed to have survived judgement by the Quintessons. Controlling the technorganic vines the Quintessons had created the mutants defeated Judge Heirodyus and used the power of Primus to reform the Sharkticons and turn the planet New Quintessa into a paradise.[3] 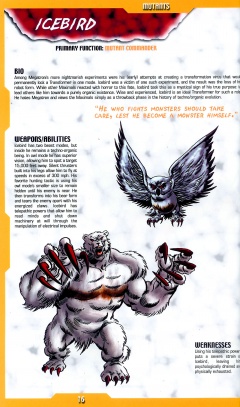 Icebird in the Beast Wars Sourcebook

Icebird also appeared in IDW Publishing's Beast Wars: The Gathering miniseries. Activated on Earth by Magmatron and a group of Predacons from the future, Icebird and the mutants emerged from their stasis pods and took up residence in a swamp that they quickly made their own. When a group newly-activated Predacons lead by Transquito ventured through the swamp on a mission they were attacked by the Mutants. Poison Bite attacked Retrax, Soundwave attacked Powerpinch and Icebird attacked Transquito. (in The Ascending it is revealed that Retrax, Powerpinch and Transquito survived, apparently none the worse for their encounter). Deciding the swamp wasn't worth their lives, Scourge and Insecticon fled.

Although the Beast Wars toy line had concluded in 1998, this sub-line was released during the Beast Machines era. Although the figures lack robot modes, they all feature vestigial robotic components — such as Icebird's robot head.
This figure was based on drawings by Hasbro designer Tim Bradley.[4]