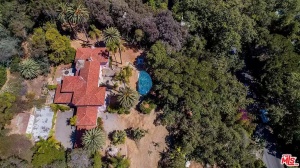 There is a property in Hollywood, often referred to as Ibrahim bin Laden's Bel Air mansion.[1]

Ibrahim bin Laden, who bought the property in 1983 for $1.653 million USD, has not used the property since his step-brother, Osama bin Laden, attacked the United States on September 11, 2001.[1] However, it has been rented out to serve a location for pornographic films.

The house was built on a 2 acre lot in 1931, a few hundred yards from the famous Bel Air Hotel.[1] Previous owners included Producer Arthur Freed.

The house itself is 7100 square feet, and the property includes a pool, hot tub, separate for car garage, and other outbuildings.[1] The house was built of concrete, covered in pink stucco.

In the summer of 2021 Ibrahim bin Laden put the property up for sale, asking $28 million USD.[1] Real estate experts predict new owners would demolish the 1931 house, and build something new.