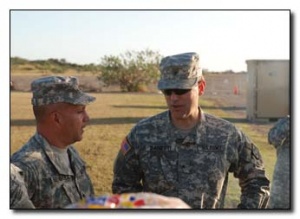 General Gregory Zanetti at a barbecue in Guantanamo.

Gregory Zanetti is an financial advisor, from New Mexico, and a former General officer in the United States Army.[1]

Among the periods he was called from the reserves, to active duty, was a post as deputy commander of Joint Task Force Guantanamo, a post he held until January 2009.[2][3][4][5]

During his service at Guantanamo there was a high-profile controversy around the conduct of Brigadier General Thomas W. Hartmann. Hartmann had been appointed the legal advisor to the Convening Officer for the Guantanamo Military Commissions. His position required him to be a fair and neutral supervisor of both the Defense team and the Prosecution team. Nevertheless, when Colonel Morris Davis, then the Chief Prosecutor, went on leave, Hartmann usurped his role, and ordered Prosecutors to prepare charges against additional suspects beyond those Davis had chosen. When Davis returned, and tried to restore order to the Prosecution team, chaos ensued.

Zanetti, as an officer of equal rank to Hartmann, testified on his observations on Hartmann's bullying conduct.[6][7]

According to Rosenberg Zanetti described Hartmann's treatment of his subordinates as[2]:

During his first six years of active service Zanetti earned a Masters degree in Finance, from Boston University.[1] When he shifted from the regular army to the reserves he established himself as a financial advisor. Zanetti eventually broadcast a radio show on financial planning.

Zanetti ran, unsuccessfully, for Lieutenant Governor of New Mexico, in 1996.[8]

Zanetti's wife, Teresa Zanetti, was a state legislator, in New Mexico.[9][10] In 2009 Zanetti considered running for Governor of New Mexico, and he officially announced his candidacy on June 14, 2021.[8] Zanetti was the third member of the Republican Party to put their name forward as a possible candidate to unseat the current Governor, Michelle Lujan Grisham, a member of the Democratic Party. The two other Republicans who put their names forward have been Jay Block and Karen Bedonie. Incumbent Governors are rarely unseated in New Mexico.

Zanetti criticized Grisham's implementation of countermeasures to the Covid 19 virus.[8] He argued his decades of experience in financial planning had left him with a good understanding of New Mexico's economy.