From WikiAlpha
Jump to: navigation, search
For other uses, see Freeway.

Freeway is a fictional character from the Transformers series. He is a heroic Throttlebot who turns into a blue car.

In Transformers: The Headmasters, Freeway and the Throttlebots were on Cybertron when Vector Sigma began to destabilize as a consequence of Optimus Prime releasing the Matrix's energy to cure the Hate Plague the previous year. The Decepticons soon invaded the planet in an attempt to take control of the computer, and Goldbug and the Throttlebots joined Grimlock and Slag in holding the line against them. Unfortunately, they were knocked unconscious by the hypnotic power of the new Decepticon Headmaster Mindwipe, but they had managed to delay the Decepticons long enough for the Autobot Headmasters to arrive and take up the fight.

Later, when the Decepticon Headmasters unleashed the Madmachine upon Cybertron, Goldbug and the Throttlebots helped the Autobot Headmasters battle the villains. Hit by a blast of the evil device's electromagnetic beams, the Throttlebots were left in convulsions, opening them up to an attack by the Decepticons. Wideload and Rollbar were again affected by Mindwipe's hypnotism and were instructed to fight each other, but Goldbug was able to get between them and snap them out of it. Goldbug proceeded to get his team organized, and he and Rollbar took on Mindwipe, clinging on to him and preventing him from flying away as they beat him up.

Goldbug and the Throttlebots went up against the Decepticon Headmasters yet again in a later battle on Earth, but pretended to lose so that they would be left free to investigate the Decepticons' newest weapon: a metal-warping meteor currently on collision course with Athenia. Disregarding Rodimus Prime's instructions to keep their distance, the Throttlebots believed they would be heroes if they could stop the meteor, but no sooner had they got within range of the space-rock than its gravity boosters began twisting and warping their ship and their bodies. 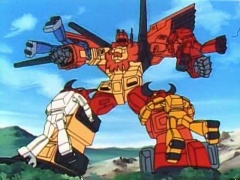 The Throttlebots disappeared after this encounter, but they eventually resurfaced months later as the Decepticons were carrying out their final plan to destroy the Earth. Goldbug and the Throttlebots teamed up with Fastlane and Cloudraker to investigate the emergence of a "Death Tower" in Santiago, Chile, only to find Predaking there waiting for them. Naturally, the small 'bots were no match for the powerful combiner, but they fought bravely, clinging onto his limbs before being hurled aside. Luckily, the Autobot Targetmasters arrived in time to bail them out and take Predaking down.