From WikiAlpha
Jump to: navigation, search
For other uses, see Fraces.

Fracas is a fictional character in the Transformers series introduced in 1987. He is a Decepticon allied Nebulan Targetmaster, and partner to the Decepticon Scourge.

Fracas turns into a high-temperature incendiary cannon with a violate temper to match. Fracas has a hair trigger temper that has him running hot all the time. The slightest misstep can trigger Fracas' rage and Scourge almost appreciates the ferocity with which his Nebulan can fight. He becomes an incendiary cannon which fires blasts of high-intensity flammable material that can sear through most Transformers' armor.

Fracas appeared in the Blackthorne Publishing The Transformers in 3D issue #3 as Scourge's sidearm. Scourge uses Fracas against the Tau-Ursans.[1]

Scourge and Fracas had a single page biography printed in issue #7 of the Dreamwave Productions Transformers: More Than Meets The Eye comic series.

Fracas appears as Scourge's gun in the Generations 2011 issue #2 "The Fierce Fighting on Planet Nebulos" where he is part team of Decepticon lead by Straxus who ambush the Autobots on Nebulos.[2]

Fracas first appeared in issue #4 of the Marvel Comics Headmasters comic in a story called "Brothers in Armor!!" where he volunteered to be binary bonded to Scourge as his Targetmaster partner. The Autobots then fled Nebulos for Earth in an attempt to lure away the Decepticons.[3]

Although Fracas is not depicted, in issue #38 of The Transformers the Autobots and Decepticons from Nebulos arrive on Earth. 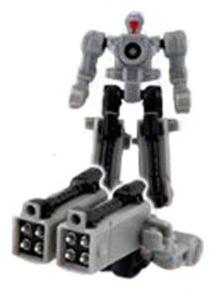 A recolor of the Power Core Combiner Mini-Con Chainclaw. This toy is meant to be used either of the United Scourge figures.

A 3D printed design done as an homage to Fracas.[4]

A 3D printed design done as an homage to Fracas and meant to work with the Generations Scourge toy.[5]

A new mold. Scourge turns from hovercraft to robot, while Fracas turns from pilot to Scourge's head.