Flamethrower is a fictional character and third-party Transformer homage to Generation 1 Slag made by JustIToys in 2006. Several limited edition recolors of this toy have been released, including a TFcon 2007 G2 green edition.

Flamethrower is an homage to 1985 Transformers Dinobot Slag. He shares the same basic toy design as Generation 1 Slag, whose function was "Flamethrower."

According to the tech specs given on the back on his box Flamethrower is very strong and tough, and packs impressive firepower, but he isn't very smart or fast.

Other third-party Transformer homage to Slag include FansToys Scoria.

When Desert Warrior Snarl was released in February 2006 it has the silhouette of Flamethrower on the side of the box, labeled as upcoming.[1]

JustIToys displayed prototype images of Flamethrower on their web site in July 2006.[3]

Reprolabels has released a set of replacement labels for Flamethrower.

The G2 version of Flamethrower was released at TFcon in April 2007.

The Dark Retribution version of Flamethrower was released in February 2009.

In August 2009 painted images of Flamethrower were posted to the JustIToys web site.[4]

The comic color version of Flamethrower was released in September 2010.

The TFWire podcast episode 30 for March 5th, 2006 reported that the Slag homage would probably be the next WST Dinorobot toy after Desert Warrior Snarl.[5]

The [email protected] podcast for June 10th, 2010 selected a picture of the Smallest Dinorobots Comic Version as one of the New Picture Picks.[6]

The biography printed with the 2007 TFcon edition of Flamethrower, written by Mike Jobba, clearly depicts him as the original Slag, with events similar to those that occurred in the Marvel Comics Transformers stories. However, fiction from the 2010 TFcon and later treats Flamethrower as a separate character from Slag.

In order to survive the rigours of combat, a soldier must often adapt to his environment. When the malevolent Shockwave appeared in the Savage Land, five Jurassic warriors were created to put a halt to his destructive actions.

Slag was no genius, but he was aware of Shockwave's power, particularly that of his ionic laser rifle. After a rudimentary geological analysis, Slag clad his synthesized Triceratops serratus exoskeleton in metallic copper, which oxidized into a green shell. One by one, Shockwave hunted them through the Savage Land and each of Slag’s Dinobot brothers fell into pools of bubbling black tar. Brute strength allowed him to throw boulders and raze maple trees, creating obstacles as Shockwave gave chase. It would have been impossible to outrun him if Slag had not been camouflaged by his enhanced armor, thus Slag eluded his Decepticon assailant until he managed to mount an attack.

With his commander's crimson energo-sword clutched firmly in hand, and his ferocity heightened by his new resolve, Slag launched an onslaught that would leave most Decepticons with a century worth of nightmares. As Shockwave approached, an enraged Slag exhausted his remaining energon with a superheated ceramic particle firespin of 3000 °C. The earth beneath them broke away, and Shockwave barely survived the blaze by crawling into the temperature-absorbing tar pits. Detecting imminent stasis lock, Slag let himself fall into the tar pit tomb.

Slag always felt he had no need for friends, even less for enemies. But in that one cataclysmic confrontation, he learned the value of his comrades. As the brush was burning, and they sank into the viscous dark liquid, Slag smiled, knowing that he would awake with one less adversary.

There was also a biography for the five-pack of Dinorobots released in 2012.

The Dinorobots are a rowdy, arrogant, lowbrow, disobedient band of warriors that some of their allies would rather scrap than deal with. They're also one of the most devastatingly powerful and close-knit combat units in the army, being incredibly powerful in robot mode and taking alternate modes base on the dinosaurs, the most powerful creatures ever to roam the Earth.

Flamethrower appeared in the comic released for the 2010 TFcon called "Nightbird Rebirth". In the story Nightbird and Anarchy are sent to steal the Master Cannons from the Autobots. Anarchy flies Nightbird to spaceship Maximus where she sneaks past the Autobots Canadian Patriot, R.E.V., Powered Commander, Deep Cover, Proto and Flash. She kills Flamethrower to get to the Master Sword, which she uses to reformat her body to a form based on Valkyrie, then escapes.[8] 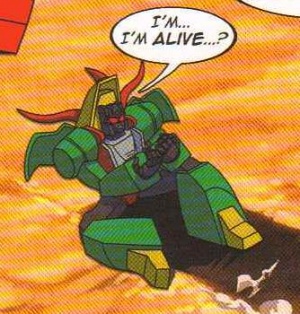 Flamethrower is a character in the TFcon 2012 comic story "Hardworker". In this story a group on Seibertron warriors are displaced to Earth during the Masterforce Wars. Flamethrower is surpried to find himself alove and among these warriors. They are discovered by Garrison and Shafter.[9]

A new old based on the Generation 1 Slag mold. Packed with a collector card, instructions, labels, a sword, gun and two fists. This release of the mold is missing the missile launcher and missiles which shipped with later versions of the mold. They shipped with the first release of Bombardier. The box art for Flamethrower includes screen shots of Slag of the Transformers animated series as well as a picture of Flamethrower along side Smallest Transforming Transformers Meister. It also promotes the upcoming release of Commander.

A recolor of the initial Flamethrower toy gold chrome. Came packaged with an additional sword. Limited to 10 pieces randomly mixed with the regular G2 Flamethrower toys.

A five-pack with the Smallest Dinorobots in a black recolor. Limited to 500 pieces.

Randomly inserted among the black versions, but the toys are red. Limited to 10 pieces.

A five-pack of the Smallest Dinorobots in a Marvel Comics accurate colors. Limited to 300 pieces.

A five-pack of the original versions of the WST Dinorobots. Limited to 800 pieces.

A set of labels for Flamethrower that make him look more like Generaton 1 Slag.[10]