Dr. Go (also called Herr Fiend) is a fictional character from the GoBots series introduced in 1984; he is an evil Renegade GoBot scientist.

Dr. Go is one of the Renegades. He is the resident Renegade mad scientist, and is depicted as speaking with a thick German accent. [1][2]

His alternate mode of a Porsche 928 is identical to the Decepticon Transformers named Dead End. [3]

On occasion Dr. Go has used a personal Stealth Device to render himself invisible.

Herr Fiend was chosen as the 2nd goofiest GoBot name by Topless Robot.[4]

His dark past is a secret that only Cy-Kill can reveal. With fiendish relish, he awaits the total takeover of planet earth.

Like most GoBots, Dr. Go has numerous abilities because of his robotic body. He does not age, can survive in space and is super-humanly strong and tough. He can fly in robot mode and project energy blasts from his hands. His body heals quickly when supplied with energy. He can turn into a car. 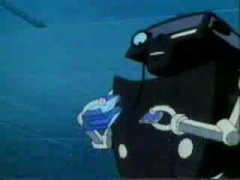 In the animated Challenge of the GoBots series Herr Fiend is given the name "Dr. Go."

In "Cy-Kill's Escape" Dr. Go and Bad Boy send a stealth device to the escaping renegades on the GoBot Prison Moon to cover their escape in a hidden ship.[6]

In episode 25, "Tarnished Image" Dr. Go creates modified mini-stealth devices that allow the Renegades to appear like Guardians. Cy-Kill, Crasher and Cop-Tur disguise themselves as Leader-1, Scooter and Turbo and go on a rampage on Earth while the real Guardians are sent on a fake rescue mission. When the Guardians return they are banished from Earth by the humans. The Guardians are eventually able to prove the Renegades staged the attacks, chase them off and capture Dr. Go.[8]

Dr. Go appears in the feature film GoBots: Battle of the Rock Lords where he uses the brain stormer on the female Rock Lord Solitaire. Due to animation errors in the film Dr. Go appears to resemble Professor von Joy in the film, meanwhile in some scenes the Guardian Zeemon appears is occasionally depicted like Dr. Go.

In Gargent 087.0 Kappa, Dr. Go was one of Cy-Kill's Renegades. He and Crain Brain were responsible for operating an Embargo Field inside the Eiffel Tower which prevented the Guardians from coming to Earth. They were defeated by the Autobot Spy Changers Wheeljack and Trailbreaker, along with the guardian Tri-Trak. The Embargo Field deactivated, and the Renegade's plan foiled.

In Gargent 984.08 Alpha Dr. Go was mentioned several times by Cy-Kill in the Fun Publications Facebook series Ask Vector Prime; an Axiom Nexus incarnation was revealed to exist who goes by the Herr Fiend name.

Dr. Go was featured in the 2016 Ask Vector Prime story Echoes and Fragments, set during the events of The Transformers: The Movie. The manipulations of the evil Gong and Sideways resulted in various GoBots swapping places with characters during the events of that film.[10]

Dr. Go was responsible for starting up Renegade Space Hawk production after Cy-Kill stole a prototype and wrung the plans from Dr. Turgenova.

Cy-Kill thought that Dr. Go would be able to considerably improve upon Cybertronian technology. He was noted to be a capable medic, and unlike Rest-Q didn't have a cliche alt mode like an ambulance. Cy-Kill also philosophically mused that it's a good thing he's got a doctorate as "Mr. Go" just doesn't have that something.

He was tasked with recreating the Master Renegade's work on Power Suits. When he expanded the task into Project: Nemesis, turning the Grungy ship into a GoBotic tank, Cy-Kill pulled the plug.

He helped create a Cylon costume, complete with a glowing red eye, so that Cy-Kill could infiltrate SciFi Con in New York City.

He modified the Rogue Star's two primary particle beam cannons into the most powerful Astro-Beam ever built, which was used to steal the communication moon of Gobotron.

Based on a Machine Robo line toy. Turns into a Porsche 928S.