From WikiAlpha
Jump to: navigation, search
For other uses, see Deadeye.

Deadeye is a fictional character who first appeared in the Starriors series based on the 1984 toy line of the same name.

Deadeye is a Cosmittor, a huge Tyrannosaurus-style robot designed to hunt and kill giant mutant monsters to prepare the Earth for the return of man, who is in suspended animation following terrible solar flares. Deadeye is a Destructor, one of 3 classes of Starrior robots. Destructors were charged destroying aliens invaders and mutant creatures caused by the solar flares.

Cricket & Deadeye were released by Tomy in 1984.

In 2019 replacement arms for Deadeye were released on Shapeways by Mathew Robert Ignash.

Most Destructors are human-sized or smaller, making Deadeye a real giant. Deadeye is a Cosmittor and is meant to work in conjunction with a Scout, named Cricket, to hunt and battle large enemies. Deadeye is heavily armored, has multiple laser emplacements, and fires exploding discs from his mouth. Deadeye is mobile, but his size makes it hard for him to negotiate unstable terrain. Another function of the Scout may have been to lead enemies to Deadeye, allowing him to operate in areas where he is more effective.

Deadeye, for all of his destructive potential, has the soul of a poet. He does not relish destruction, but considers it his purpose and fulfills it dutifully. Like most Starriors at the time of the story line, Deadeye believes man a myth. Deadeye is extremely close to his constant companion Cricket.

Deadeye has a terrible disability as well. He is blind. He is totally reliant on Cricket to guide him and tell him where to fire. Because of this, he is slow and not terribly effective against fast targets. It also means Cricket must be very near Deadeye in battle. While Deadeye is heavily armored, Cricket is not.

Deadeye and Cricket appeared in Starriors Tunnel of Doom Odyssey I by published by Peter Pan. 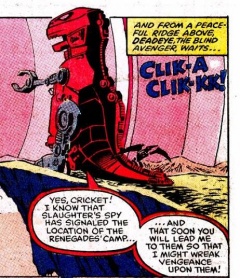 Deadeye was a prominent character in the Starriors comics by Marvel Comics.

In the final battle in limited series issue 4. "The Quest Ends!", Cricket is killed by Auntie Tank, causing Deadeye to go berserk with grief. He fires wildly, killing friend and foe alike, and is only stopped when Hotshot activates the Battlestation's Laser Ram. With a blast of its powerful twin lasers, Deadeye is silenced forever.

Deadeye and Cricket appeared in the Fun Publications story Withered Hope. They were seen talking to the GoBot Bugbite in Axiom Nexus.

When Deadeye needed new arms, Ursenal gave him a hand.[1]

Comes with discs, lasers and Cricket, a remote control.
Comes with one of the first four Starriors pack-in comics.
This toy was recolored into Warugasu and R.A.T.S. Spit-Fire and Spy-Bird. It was remolded into B/O Space Dinosaur.