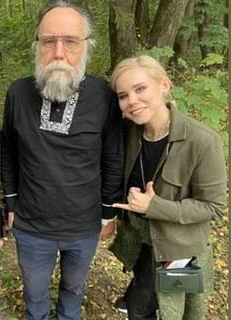 A photo Daria Dugina tweeted of her, with her father, Aleksander Dugin.

Daria Dugina was the daughter of Aleksandr Dugin, a prominent political ally of Russian President, Vladimir Putin, who died on August 21, 2022, when she was driving her father's car and it exploded.[1]

Her father has been described as the primary architect of Russia's 2014 Invasion of Crimea, and its 2022 Russian invasion of Ukraine.[1] In reaction her father had been placed under economic sanctions by various nations, in 2015. Following the invasion of Ukraine, and her own strong public support of that invasion, both the United States and the United Kingdom placed Daria herself under sanctions.[2][3]

Russian authorities initiated a murder investigation almost immediately after the explosion.[4] According to members of her family Daria had borrowed her father's car at the last minute, and died in an assassination attempt targetting him.[5]

Career as a political analyst and commentator

Dugina was a graduate of Moscow University.[2] Neoplatonicism was her field of speciality. She held a PhD, and was usually described as a political analyst.[6]

Dugina was frequently used as a political commentator. She called the Russian invasion of Ukraine "a clash of civilizations".[2]

Dugina visited Mariupol on June 13, 2022, to celebrate Russia's subdual of the last elements of resistance in that port city.[7] American ex-patriate John Mark Dougan interviewed Dugina on board a Russian vessel in Mariupol's harbor .[8] He appeared to agree to her claims that Ukrainians were committing war crimes, against their own civilians, with NATO support. The New York Times reported that, after touring the bunkers in the massive Azovstal steel plant, she said she found this plant, where the last Ukrainian soldiers had made their last stand, "was filled with 'Satanist,' 'black energy'."

Dugina and her father were attending a cultural event, described as centering around the Arts and traditional Russian values.[9] Accounts differ over how she ended up driving the car with the bomb, when observers seem to concur it was her father who was the assassination target. Leo Sands, of the BBC News, reported that her father was going to leave the event with Dugina, but changed vehicles at the last moment. The New Indian Express reported she borrowed one of her father's cars, at the last minute.[1] The Washington Post quoted Andrey Krasnov, a friend of her father, who said “Darya was driving another car but she took his car today.”[10]

Dugina is a co-author of a book about to be published on the Ukraine war, entitled "The Z book".[7] The name is based on Russian soldiers using the symbol to distinguish their vehicles from Ukrainian vehicles. Russian and Ukrainian forces both use vehicles they inherited from the old Soviet Union, making the use of ad hoc symbols urgent, to prevent friendly fire.

Radio Free Europe reported that the FSB claims about Dugina's killing had triggered skepticism.[11] They asserted that the Dugins' influence had been waning, and they were unlikely targets for outsiders to kill, and suggested that the bomb was a sign of infighting between factions within the Russian leadership.

Ilya Ponomarev, is a former member of the Russian Duma, is one of the people who have asserted the assassination was Russian-on-Russion - not outsiders. Ponomarev was the sole member of the Duma to oppose the 2014 annexation of Crimea, and left Russia for exile in Kyiv, Ukraine, in 2016. Following Dugina's death he asserted he was in contact with a militant group in Russia, named the Natsional'naya respublikanskaya armiya (National Republican Army), who, he said, took responsibility for Dugina's assassination. He said this group had supplied him with photos of the scene of the car-bomb that confirmed they were present. He also said observers from this group saw two people enter Dugina's car, which made them think her father was also a passenger. However, official reports have said nothing about her car carrying a passenger.