Combiner Wars Part 2 is a fictional story in the Transformers: Renegade Rhetoric series episode 65. Written in 2016, it retroactively took place in an unaired second season of the Challenge of the GoBots animated series.[1]

A treaty between Earth, GoBotron and Quartex leads to a combiner war between Guardian and Renegade forces.

The following was first posted on the Renegade Rhetoric Facebook page on February 5th, 2016.[2]

Cy-Kill: There I stood, in control of Nemesis, ironically holding my own personal nemesis, Leader-1, as well as the irritating but persistent Boulder. Newcastle attempted to run, but Cop-Tur snagged him effortlessly. "We have what we came for, Renegades and Rock Lords! To Stonehead!" We boarded Magmar's Stone Wing and flew off, to what I thought was to be my final victory.

Damaged Guardians and Rock Lords strewn haphazardly about the battlefield. Scooter helped Turbo get to his feet. Morale was low among the Guardians and Rock Lords, for how could it be otherwise. Solitaire attempted to consolidate some resistance for an attack on Stonehead to rescue our leadership, but enthusiasm was flagging. "How can we beat that rotten Renegade, now that he's got three combiners? We don't even have a leader," remarked Turbo, echoing the sentiment that they all must have felt.

Things seemed hopeless for my arrayed enemies... until Matt took the stage. That accursed human gave a rousing speech, starting off from the position that yes, things looked dire, but then asking if giving up was what Leader-1 would want, was what Boulder would want, was what Newcastle would want. By the end, he had put the fire back in the bellies of that rabble. The Secret Riders, Fossil Lords, Robo Rebels, Jewel Lords, Power Suited Guardians, Rock Lords, and humans were all ready to take a run at Stonehead. Nuggit, sensibly, remarked that they would need a plan. Scooter piped up that he had one that was risky, but just might work. 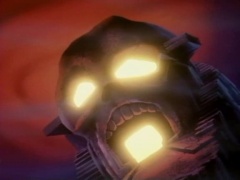 Stonehead, on the planet Quartex

Back at Stonehead, the atmosphere was one of revelry. I could still barely contain my contempt for Magmar's igneous imbecility, but I was feeling magnanimous. Besides, he was our host, after all, and his hordes of Dragon Stone, Blast Rock, and Stun Stone drones made any approach to Stonehead a death trap. I had planned to let the Guardians and assorted mineral morons stew in the juices of their own defeat, before putting out an ultimatum of my own.

I ordered my entire Thruster fleet to Quartex, to blockade the planet and prevent any additional reinforcements from arriving. Though we were outnumbered in space, the heavy meteorite density about Quartex made it possible for us to prevent any approach with the ships at our disposal. With so many Guardians in attendance here on Quartex, their forces were hopelessly divided. If they did not agree to my terms, I was prepared to slaughter all of them on Quartex before bringing the Combiner Wars to GoBotron and Earth.

Before I could even make my announcement to the universe, I was pleasantly surprised to see Scooter trudging up the trail to Stonehead holding a white flag. Behind him were Turbo, Small Foot, Solitaire, Bent Wing, Nuggit, and Tri-Trak. Crasher advised caution, but I was all too happy to see my enemies remaining leadership having finally seen the folly of opposing my will. In retrospect, I should have listened to her. Instead, I instructed the Action Shock Rock drones to let them through, and they marched to our front gates. Of course, I had every gun on the place trained on them, but strode out confidently to accept their surrender.

"So, you Guardians have finally come to your senses, eh? I think you'll find that Renegade justice is stern but fair, and my dominion over your realms will result in a great prosperity... for all smart enough to play ball."

Scooter gulped. "What choice did we have? You hold all the cards. We just ask that you be merciful to the populations of the three planets you'll be ruling."

I was about to promise mercy--a promise I considered in no way binding--when Magmar opened his rock hole. "You mean two planets. Quartex belongs to me."

Before I could agree with him--after all, who needs to rule a planet of pebbles?--Solitaire spoke up. "Surely three. Magmar has been trying to rule Quartex for decades, and Cy-Kill has accomplished the task in mere hours."

I couldn't resist. "The lady has a point."

Cop-Tur tried to save me from my folly. "Uh, Cy-Kill, didn't we agree we don't even want Quartex?"

I just waved him off, high on my triumph. "I'm sure I can find some use for it. It's not like Magmar would even know what to do with it." 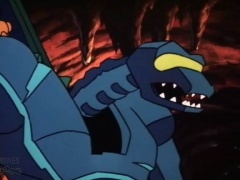 Tombstone in GoBots: Battle of the Rock Lords

Magmar snapped. "You're in MY fortress, surrounded by MY troops! I won't tolerate your robo-lip! Tombstone, Brimstone, seize him!"

The quartz and brimstone imbeciles moved for me, and I picked up one and hurtled him into the other. By this point, the Guardians and their allies had scattered, and I found myself in a three-way fight. Worse, the Guardians had a focused plan. Turbo and Solitaire participated in the battle, keeping our heads down with frequent blasts. Tri-Trak and Bent Wing located the prisoners and released them, bringing Leader-1 and Boulder into the mix. Small Foot took out the Narlibaboon near the panel controlling the Action Shock Rocks, allowing Scooter and Nuggit to hack two of the three types, turning the Blast Rock and Stun Stone drones against the Dragon Stones. A short but furious battle ensued. By the time I realized what was happening, we had lost the battle...

Puzzler in Challenge of the GoBots

...but not the war! I still had the Combiner advantage. In the face of the rest of the Guardians and Rock Lords advancing on Stonehead, I ordered Puzzler, Nemesis, and Monsterous to form and give my enemies a thrashing. Unfortunately, nearly half of the Blast Rock and Stun Stones were still operational. Scooter and Nuggit turned all of their firepower on Monsterous, the most powerful but least disciplined of my Combiners. Enraged, it abandoned the approaching threat of Courageous and Fossilsaurus to deal with the Action Shock Rocks, allowing the Guardians a fair fight. How I detest a fair fight. A.J. noted that it was a good thing they had a robotic Rock Lord on hand to help hack the Action Shock Rocks, a statement which gave Solitaire a flash of inspiration... but one that would have to wait for later.

With our combiner advantage neutralized, I now faced a large horde of Rock Lords and Guardians about to lay siege to the fortress I was currently contesting with Magmar. The fight was hopeless, so I prepared to withdraw to Rogue Star... only to hear a report from Fitor that the entire Guardian fleet had engaged with the Thruster blockade. Worse still, Nuggit had contacted UNECOM and told them that their beloved leader was imperiled, and UNECOM had thrown every ship they had at the blockade. The many asteroids around Quartex made retreat impossible, and my ships were forced to land on the planet and surrender, or crash and be destroyed. I heard Pow Wow shout that they were being boarded, and then Fitor's transmission cut out.

As I watched the shooting stars that were the remains of my space fleet, I realized that I still had a last, desperate shot at victory. If I could just take Leader-1 back out of the fight, the Guardian morale might collapse again. I charged at him, and we engaged in a furious duel over the Stonehead fortress. A distant part of my mind noted that Magmar and Bolder were similarly occupied. Time and again I nearly had him in my sights, but just as I prepared to take my final shot, he pulled up suddenly and I found myself colliding with Magmar!

The two of us tumbled off of his fortress, towards a pit of lava below, seemingly to our deaths. Leader-1 and Boulder looked over the pit, but saw only bubbling lava. "Nothing could have survived that plunge, Boulder," spake Leader-1 confidently.

Boulder wasn't so sure. "Do you really think we've seen the last of them, Leader-1?"

The Guardian leader shook his head. "I'm not sure, Boulder. Cy-Kill is the trickiest GoBot I've ever known. But I do know this--the Renegades, and evil Rock Lords, are through for good!" A great cheer went up. It was true, Magmar's forces had been rounded up, my combiners had been defeated, my Thruster fleet was shattered, and for the first time ever Rogue Star was in Guardian hands.

The next day, the planned ceremony at the Ingot Ampitheater took place. This time, the treaty was signed without incident. The audience erupted in a loud cheer, and virtually every Guardian and many allies from over the years were in attendance. Why, even Vec-Tor put in an appearance, smiling knowingly. My Renegades were taken back to Elba to await trial. In fact, as Cop-Tur and Crasher were led away in energy chains, Cop-Tur was heard wondering "Hey, do you think it's too late to join the Guardians," prompting Crasher to tell him, "Oh, do shut up, Cop-Tur." Magmar's gang was sentenced to hard labor for their multitudinous crimes; Sticks 'N Stones even attempted to turn evidence against each other!

UNECOM established a permanent base on Quartex, which was itself in the beginnings of a renaissance. The moment Nuggit set foot in Clastixandria, at Solitaire's prompting, he was able to interface with the ancient systems and restore the lost knowledge of the Ro-Beings. The supernova which had prompted them to undergo the metamorphosis of their world had damaged wiped Nuggit's conscious memory circuits, but he still possessed the latent key which enabled the library to become fully operational. Quartex was destined to become one of the great centers of learning in the galaxy. 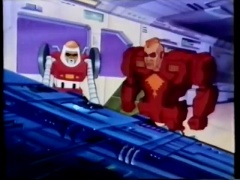 Cy-Kill and Magmar in GoBots: Battle of the Rock Lords

And where was I? Stuck with a rock as my only ally, who had pulled me into a secret tunnel the instant before I plunged into the lava. We limped away from Quartex under cover of the Stealth Device, in a wrecked Thruster I had salvaged from the Foidolite Forest. But this I swear. If it take a thousand years... if it take a million... the Renegade cause will rise again!