Combiner Wars Part 1 is a fictional story in the Transformers: Renegade Rhetoric series episode 64. Written in 2016, it retroactively took place in an unaired second season of the Challenge of the GoBots animated series.[1]

A treaty between Earth, GoBotron and Quartex leads to a combiner war between Guardian and Renegade forces.

The following was first posted on the Renegade Rhetoric Facebook page on February 5th, 2016.[2]

Cy-Kill: An excellent question! In fact, I am currently in the middle of my greatest scheme ever, and it involves Project: Nemesis. 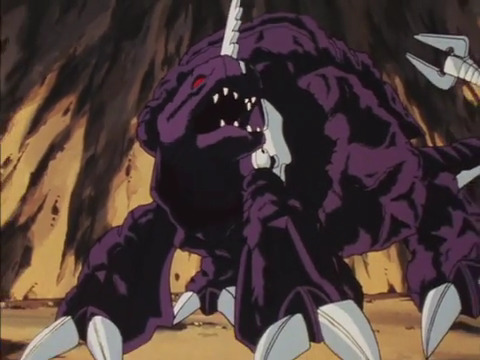 It began when General Newcastle arrived in a UNECOM ship on Quartex. Leader-1 greeted him, welcoming him to the planet "and to a tri-planet alliance that will last a thousand years and make the galaxy safe from Renegades and rogue Rock Lords alike, once and for all!" Boulder and Solitaire, too, were there, and Newcastle expressed his disbelief at being surrounded by so many living rocks. His reverie was broken when two Rockasaurs burst onto the scene at attacked! It was a Terra-Roc and a Spike Stone! Boulder, Solitaire, Leader-1, and Turbo engaged in a futile battle with the creatures, intent on keeping them from smashing Newcastle's shuttle, but it was clear the Guardian goofs and stone simpletons were outmatched. Then, the Jewel Lords Flamestone and Sunstone entered the fray. Flamestone drove Terra-Roc back with his ferocious attacks, and Sunstone soothed the savage Spike Stone. Soon both Rockasaurs had been driven off, leaving Newcastle complimenting the Jewel Lords on their abilities.

From the shadows, Spearhead, the kyanite chump, and Saberstone, the garnet goon, watched, observing everything. Magmar's plan to herd the Rockasaurs to the landing zone had failed. After a brief but furtive argument, they converted to their boulder configurations and rolled back to Stonehead to report to Magmar.

Magmar was, of course, distraught that his feeble plan had failed. Though he had recently made Stonehead impregnable, with the creation of his hordes of Action Shock Rock drones, he had been steadily losing ground to Boulder's Rock Lords, Solitaire's Jewel Lords, and Jaw Bone's Fossil Lords. With little alternative, he used Stonehead's power to send a call to me, at Rogue Star.

I, meanwhile, was witnessing a demonstration. Dr. Go, with some help from Tic Tac's scientific expertise, had finished work on his improvement to the Grungy combiner. Now, the central unit was a tank, synced to my brainwaves. I watched as BuggyMan, Block Head, Loco, and Decker Decker utilized their Power Suits to magnify their own abilities. Truly, Dr. Go had outdone himself. Thus, I was in high spirits when Magmar's call came in.

At first he attempted to play haughty, teasing me that he had information I'd want. I had little interest in his ferrous fatuousness, and told him so. But when I moved to cut the connection, he spilled his proverbial guts. My expression darkened at first at the prospect of this new three-planet alliance. Human bases on Quartex? Boulder helping to defend Earth? But then I realized, this was the perfect time to flex my new muscles. I cut the dacite dolt off mid sentence, and then told him exactly what he was going to do to prepare for my arrival.

The day of the official signing of the treaty was here. It was a beautiful, sunny day, and the Ingot Ampitheater was filled with cheering rock rubes. Leader-1, Boulder, Solitaire, and General Newcastle all stood on the stage. In the stands, Nick, A.J., and Matt were all resplendent in their dress uniforms. Nick even expressed the hope that, with the alliance in place, they might be able to find the mysterious A.I. who was prophezied to be able to restore the lost knowledge of the Ro-Beings. Nuggit, who had clearly polished his gold carapace for the occasion, sat with a gleaming Scooter and they talked shop. The Secret Riders were present, as were the Robo Rebels. Small Foot stood guard with the ruby Flamestone at the south gate, and Turbo stood with Sunstone at the north gate. Even the Last Engineer turned up in the audience, visiting from New Earth with his family. Everything seemed auspicious as Solitaire began to officiate. "This is a new day for three worlds. When each of the three leaders assembled on stage signs this document, we will be forever committed to the mutual defense of our worlds!"

With a flourish, Solitaire produced the treaty... and it was shot out of her hand! The audience gasped and turned, only to see Magmar, in the hills north of the Amphitheater, wielding his ax-rifle. "Attack," he shouted, and the rocks around the arena's north entrance resolved into his troops. The pompous Sunstone, who believed Jewel Lords superior to all other forms of rocks, and, not incidentally, GoBots, had been getting on Turbo's nerves, but the Guardian was certainly glad of his aid when faced with nine nasty Rock Lords. They ducked behind cover and began firing, knowing they would only need to hold for few moments before reinforcements arrived.

Boulder's forces, as well as the Guardians in the audience, rushed to the north gate to help Turbo and his amber compatriot. Narlibats swooped in from overhead, forcing those on stage to dive for cover. Although Magmar had brought his entire force to the sortie, they were only ten strong, and Boulder's forces plus the Guardians had him outnumbered by better than two to one.

At the south gate, Small Foot wanted to stay at her post, despite the action. She had been getting along with her upbeat Jewel Lord partner, but was distressed when the hothead ran off to aid in the defense of the north gate, leaving her all alone. And well she should have, for Magmar's forces weren't the only villains about! When the opposition was sufficiently distracted, Cop-Tur, Crasher, and I strode boldly forward to her position, with Zod trailing behind! She attempted to shout a warning, but I blasted her as she turned to shout. Amid the pandemonium, no one noticed one more blast!

With a clear shot at our enemies rear, I saw no reason to delay. I gave Fitor, in command of our fleet from Rogue Star, the order to drop our Stealth Device and blockade the planet, then waded into the carnage. I savored every minute as we blasted Guardians and Rock Lords left and right. The scardy-stones in the audience running off in a panic was a delightful bonus. 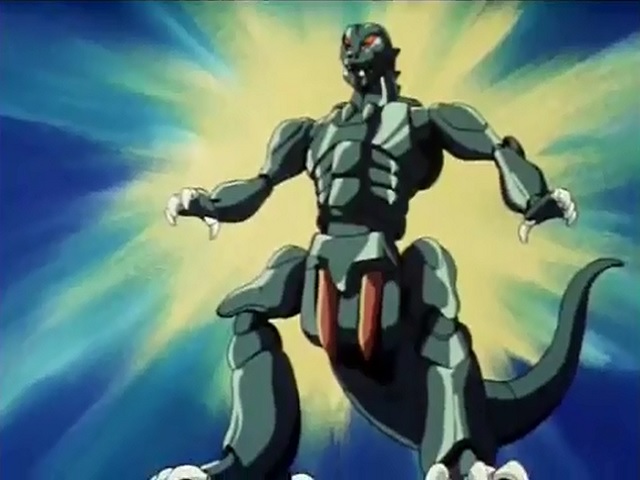 Of course, Leader-1 hadn't allowed all of his forces to idle in the audience. He called in his reserves the moment he saw what was happening, and soon the battle was joined by Courageous, who picked up Zod by the tail and hurtled him over the horizon. The Guardians attempted to rally, but I was prepared for this eventuality. I ordered Fright Face to combine into Monsterous, and the two leviathans grappled. Boulder, too, had kept an ace up his non-existent sleeve, and summoned Jaw Bone and the Fossil Lords! Fossilsaurus formed, and pulled Monsterous off of Courageous. GoBot and fossil battled side by side, and Monsterous was forced to duck behind the immense rock stage for cover... but not for long. At my command, the six beings of Puzzler united, and with their combined Mighty Skills, they rushed into battle.

Leader-1 emerged from cover to throw a blast in my direction, one which I handily dodged. "Give it up, Cy-Kill. You may have caught us by surprise, but we're ready for you now. And with both sides having two combiners, you'll never win this Combiner War."

I just chuckled, all the while using my brainwaves to move the Nemesis tank into position. "Perhaps you're right, Leader-1, perhaps we'd lose in a fair fight... but Renegades never fight fair. Form Nemesis!" With that, my four Power Suited soldier emerged, and united to form Nemesis. With three combiners to Leader-1's two, we pummeled the Guardians' towering titans until they were forced to disengage! Using my brainwaves, I had Nemesis snatch Boulder and Leader-1 from the stage. I laughed and laughed, which seems like a good place to end things for now. As this scheme is still ongoing, I shall report back when my final victory is secured.