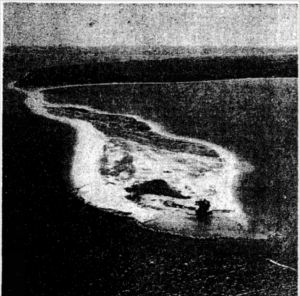 By 1961 drifting sand had reconnected the Island to Cedar Point.

Cedar Island is located off the tip of Cedar Point, Long Island. It is composed of drifting sand, so, intermittently, it is a sandspit, or an island.[1][2]

The United States purchased Cedar Island in 1834, for $200.[1] The property, then described as a "sandspit", was three acres.

The United States Treasury sought buyers for the Island in 1936.[1] By 1936 erosion had reduced its area to just under one acre.

In 1961 Mrs Winthrop C. Bradley, the owner of the property, sued her neighbors, after they locked her from accessing a trail to the property.[2] Her property had been reconnected to Long Island, by drifting sand, and, for the the last 18 years, she had accessed her property using a trail that crossed her neighbors property. But, in 1961, they placed locks on the gates to that trail. They told the courts that Tradespeople hired by Mrs Bradley were using the trail too frequently, causing too much damage in an environmentally sensitive area.