Captain America is a fictional character and super hero owned by Marvel Comics.

Captain was created by Joe Simon and Jack Kirby in 1941.

Steve Rogers was born during the Depression and grew up a frail youth in a poor family. His father died when he was a child, his mother when he was in his late teens. Horrified by newsreel footage of the Nazis in Europe, Rogers was inspired to try to enlist in the Army. However, because of his frailty and sickness, he was rejected. Overhearing the boy's earnest plea to be accepted, General Chester Phillips of the U.S. Army offered Rogers the opportunity to take part in a special experiment called Operation: Rebirth. Rogers agreed and was taken to a secret laboratory in Washington, D.C. where he was introduced to Dr. Abrahan Erskine (code named: Prof. Reinstein), the creator to the Super-Soldier formula.

After weeks of tests, Rogers was at last administered the Super-Soldier serum. Given part of the compound intravenously and another part orally, Rogers was then bombarded by "vita-rays," a special combination of exotic (in 1941) wavelengths of radiation designed to accelerate and stabilize the serum's effect on his body. Steve Rogers emerged from the vita-ray chamber with a body as perfect as a body can be and still be human. A Nazi spy who observed the experiment murdered Dr. Erskine mere minutes after its conclusion. Erskine died without fully committing the Super-Soldier formula to paper, leaving Steve Rogers the Sole beneficiary of his genius.

Roger was then put through an intensive physical and tactical training program,teaching him gymnastics, hand-to-hand combat and military strategy. Three months later, he was given his first assignment, to stop the Nazi agent called the Red Skull. To help him become a symbolic counterpart to the Red Skull, Rogers was given the red, white, and blue costume of Captain America. 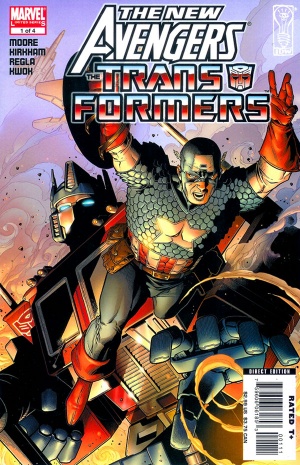 Captain America, in contact with Director Hill, led the Avengers sent to investigate the conflict between Latveria and Symkaria. Arriving in Latveria, they found a strange domed structure unlike anything found on Earth. Entering it, the Avengers were attacked by the building's defenses and Spider-Man was kidnapped, which upset Wolverine and Luke Cage. Captain America decided to throw some insults their way. The three remaining Avengers were subsequently joined by Ms. Marvel and the Falcon, just in time to encounter a group of Autobots. Unknowingly under the insidious influence of the Psycho-Prism, Captain America ordered his Avengers to attack.[1]

As the two teams skirmished, Ratchet planted an inhibitor device on Captain America, negating the Prism's effects. As the Avengers stood down, Doctor Doom joined them and vowed to help them defend his homeland against the Decepticons, who had stolen the Psycho-Prism from him. Cap summoned Iron Man and set to attacking the Decepticon array. The combined efforts of the Avengers and Autobots failed to make a dent in it—until the fortress's walls opened up to reveal a team of Decepticons in mirror response mode.[2]

Captain America flew the Avengers' Quinjet into battle with the Decepticons' aerial forces, but soon found himself overwhelmed. With Iron Man's assistance, Cap, Falcon, and Ms. Marvel managed to ground the fliers, but found that their efforts had been in vain when Megatron and Doom announced that they had joined forces and taken Ratchet, Prowl, Spider-Man, and Luke Cage hostage, vowing to kill them if their teammates did not surrender. Cap sided with Bumblebee in his willingness to sacrifice the hostages to prevent a Symkarian-Latverian war, but Optimus Prime proposed another solution.[3]

Outside the array, Captain America confronted Megatron with his allies. With the hostages successfully freed and the Psycho-Prism destroyed, the Avengers and Autobots decisively beat the Decepticons, forcing them to flee. Cap received word from S.H.I.E.L.D. that the Symkarians had called off their attack, and departed with Wolverine, Iron Man, and Spider-Man in the Quinjet—which seemed different somehow...[4]

Once it was established that Bruce Banner's mind was in control of the Hulk's body, the Hulk was treated to a celebration in New York City where he received a presidential pardon from Ronald Reagan, the key to the city, and praise from a number of superheroes, including Captain America.[6]

Captain America was among the number of heroes who were transported to the Battleworld of the Beyonder. While on this planet his shield was cracked, but the Captain discovered that this planet had a habit of making desires come true and he was able to repair the shield through force of will.[7]

Later, when Steve Rogers gave up his Captain America identity due to governmental pressure, the government, an agency known as the Commission, hired John Walker, formerly Super-Patriot II, to take his place, even training him, using the Taskmaster at one point.[9]

When the quitting and replacement of Captain America was revealed to be a plot by the Red Skull, Walker fought Captain America due to Red Skull's trickery. Eventually the two defeated the Skull, and Steve Rogers was brought back as the real Captain America, and Walker was presumably killed by Scourge.[10]

Captain America was among the heroes who were mentally compelled into joining the Goddess in her Infinity Crusade.[11]

Captain America was among the people invited to the wedding of Rick Jones and Marlo Chandler. He gave the bride away.[12]

Captain America was among the members of the Avengers who were captured by Morgan Le Fay and mind controlled into becoming her personal guard, the Queen's Vengeance. While briefly under her control he went by the name Yoeman America.[13]

He was among the heroes incapacitated by Graviton when he attempted to take over the Earth once again.[15] 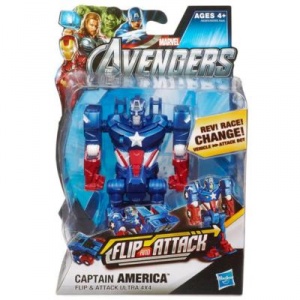 A new mold. Turns from Captain America into a Hummer truck. Comes with a shield accessory. This toy was remolded into Iron Man.

A slight recolor of the Crossovers Captain America toy.

A pull back toy that automatically transforms from Ultra 4x4 to Captain America.[16]