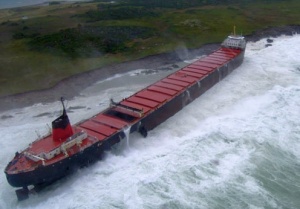 The Canadian Miner aground off Scaterie Island, Nova Scotia.

The Canadian Miner was a vessel in the fleet of Algoma Central. On September 20, 2011, she ran aground off the coast of Nova Scotia while being towed to Turkey for demolition.[1] She had on board "3,000 litres of oily waste". The Greek tugboat Hellas responsible for the tow was detained by Canadian officials. Estimates of the cost of cleanup has been estimated to be at least $5 million CAD. The government of Nova Scotia estimated that if the wreck couldn't be towed away, and had to be taken apart on-site, costs could rise as high as $25 million CAD.[2]

The vessel was commissioned the Maplecliffe Hall when she was launched in 1966, and was operated by Hall Navigation.[3] She was renamed the Le Moyne in 1988, after Hall Navigation dissolved and she was acquired by Canada Steamship Lines. She was renamed Canadian Miner by Algoma Central. Finally in 2011, she was acquired by Turkish firm Arivina Navigation SA and renamed simply Miner for her tow to the wrecker's yard.

Like most lake freighters the vessel was a bulk carrier shipping grain, ore, aggregates or coal.[3] The vessel was commissioned in 1966. She was powered by four 1471 kilowatt 2-stroke diesel engines. Unusually for lake freighters she was never equipped with a bow thruster.

In 1984 the vessel tried carrying standard shipping containers.[3] The experiment was not seen as a success.

The vessel was built with a rarely used owner's stateroom.[4] To help raise funds to equip Georgian College with a marine simulator Algoma Central offered a trip for two in the owner's stateroom as the grand prize in a raffle.

The Cape Breton Post reported on April 16, 2012, that the salvage experts contracted by the Government of Nova Scotia was expected to return a salvage plan shortly.[5] At that time the vessel was still aground just off Scatarie Island, which, in turn is off the east coast of Cape Breton Island -- the northern tip of Nova Scotia.