Brain Swap is a fictional story in the Transformers: Renegade Rhetoric series episode 23. Written in 2015, it retroactively took place in an unaired second season of the Challenge of the GoBots animated series.[1]

The Renegades discover a a cyber-mimetic virus which nearly defeats the Guardians, but Rest-Q develops a cure.

The following was first posted on the Ask Vector Prime Facebook page on October 17th, 2015. 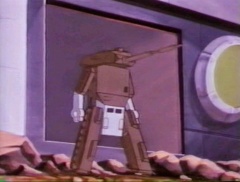 Destroyer in Challenge of the GoBots

Crasher grew tired of Scooter's technical expertise foiling our operations, and set a trap to capture and interrogate him. Who could have foreseen that a lightning strike to our Thruster whilst he was having his mind probed by the Brainstormer would result in him switching consciousness with me. It was incredibly frustrating to be trapped in his body and having to elude my own forces, even as he nervously sputtered his way through interactions with my crew. I was nearly dispatched by Destroyer, one of my most loyal troopers!

Louis Sun: Can you tell us more about your subordinates Slicks and Destroyer?

Cy-Kill: I would be pleased to! Slicks is a Renault RE30 F1 car, and one of my fastest warriors. Had he been available to me during the Alienapolis Five Million, I surely would have used him, but he was back at Rogue Star. He's a bit of an opportunist. In fact, the first time I met one of the Swindles he reminded me a bit of Slicks. He faced off against Van Guard in the Arena, and I'm happy to say he won his conflict through speed and cunning.

Destroyer is a mighty Leopard 2A4 tank. Perhaps not my most imaginative warrior, he at least knows how to follow orders, and his dogged persistence puts him in good stead. He's also fearless around Zods. His battle against Defendor, a Saladin Mk. II, looked to be a near thing despite Destroyer's superior firepower, but he too managed to win in the end.