Bolar is a fictional character from the Starriors series in 1984. He is an evil member of the Destructors and has a thrash whip in his right hand.

Bolar is a Destructor Wastor equipped with a thrash whip in his right hand. His left hand has four webbed fingers. He is one of the Starriors with no inbuilt laser weapons, but he can utilize 3mm peg add-on weapons from other figures.

Destructors are programmed to destroy mutants and invading aliens. Wastors are a humanoid series of Starrior, roughly the same height as an adult human, though somewhat bulkier.

Bolar was part of the second wave of Wastors.

Bolar: A formidable Wastor warrior in search of the perfect opponent. 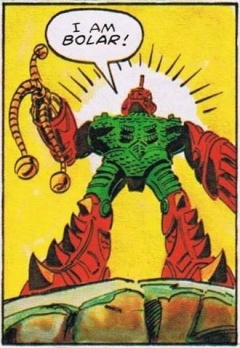 Bolar appeared in the Starriors Pack-in comic issue 6, called "Bolar!" Bolar followed the Protectors in the Forbidden Zone seeking Ripsaw, who he heard might be a worthy opponent. When Ripsaw refused to fight him, Bolar attacked Twin Blade and Flashfist in an attempt to goad Ripsaw into fighting. When the Destructors Slice and Clawgut interfered and ruined his fight Bolar attacked them. As the Destructors fought the Protectors fled.