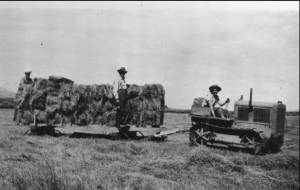 Blakistan flats is the name given to a portion of Waterton Lakes Park that was given over to pastures to grow fodder for the horses park staff required, in the early 20th century.[1]

1916 was the first year that parkland was used to grow fodder.[1] 20 acres were set aside. The number of horses park staff used fluctuated, but in 1924 they employed forty horses.