Attlus the Conqueror is a fictional character in the Mythic Legions series introduced in 2016. He is the heroic commander of the House of the Nobel Bear.

Attlus is a heroic character in the Mythic Legions series. He is the brother of Attila Leossyr and commander of the House of the Nobel Bear, a ragtag assembly of powerful defenders from the outskirts and wastelands of Mythoss.

Note: Some material, including his initial reveal at the Kickstarter, refers to him as Attlus the "Conquerer", but his toy package spells his title "Conqueror".

The Attlus the Conqueror toy was funded by the Mythic Legions Action Figures Kickstarter campaign in 2015. He was available for $45 by himself or as a $33 add-on for US backers.[1]

Attlus the Conqueror was part of the second Mythic Legions All-Stars 2 set which went up for preorder in January 2018. 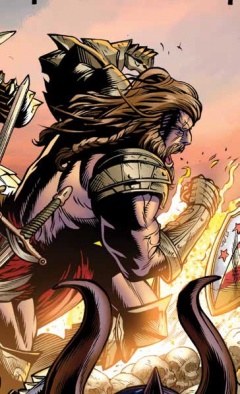 Attlus the Conqueror was banished by the Army of Leodysseus after renouncing his claim to lead those very soldiers. His younger brother Attila was chosen to lead the Army while Attlus roamed the wastelands of Mythoss forming a battalion of his own. "The Noble Bear", as Attlus is known, trained his band of outcasts and renegades to defend their homes against the rising tide of evil forces poisoning their lands.

The biography for Otho states Otho was inseparable childhood friends and trained with with Attila and Attlus.

The biography for Attila Leossyr tells that Attlus is the older brother of Attila and that Attlus renounced his claim to leadership of the Army of Leodysseus.

The biography for Calavius mentions that Calavius met Attlus as a recently captured gladiator. Together they led the rebellion that destroyed Mercurian's gladiatorial games and the ancient colosseum that housed them.

The biography for Thord Ironjaw says when Attlus the Conqueror was banished from the Army of Leodysseus it was Thord Ironjaw who first came to his aid. With Attlus’ help Thord convinced his fellow Dwarves from the Grayvein mountains to unite and create a spark that will set fire to the rebellion.

The biography for Jjuno the Crusher states when she was a young child her family joined with Attlus the Conqueror and his band of outsiders. When her parents were killed in a skirmish with Skapular the Cryptbreaker and his Sons of the Red Star, Jjuno blamed Attlus. Although Attlus tried to care for her after the loss of her parents, Jjuno left his army.

The biography for Bolthor the Tower says the half giant is a core member of Attlus' inner circle.

A biography for Attlus the Conqueror appeared in Mythic Legions Book 1.

A 1:12 scale figure by Four Horsemen. Comes with an original head an chest. This figure uses parts first used on other figures in the line. Comes with a sword, dagger and axe with an optional second blade.

A release of the figure in grey plastic with no paint. Limited to 10 pieces.[2]