Astro Adventures is a fiction series by Mathew Robert Ignash.

Narrator - Astro Adventures! Follow Commander Astroblast in his relentless battle against those who endanger freedom of the Space Republic - but Commander Astroblast was not always the leader of the Protectors. Once space ships were nearly powerless to combat the menaces that terrorized the black skies, and then in a universe fallen to chaos there appeared a leader! This is the story of a man whose courage and dedication expanded to all the planets, and of how Captain Steve Astro became commander of the Protectors. Our story begins when Captain Astro piloted his patrol cruiser on a routine mission off his home world, Hirano. During the mission he receives a tachyon telegraph message from Space Senator Alvarez.

Captain Astro -This is Captain Steve Astro of the patrol cruiser C-202, what can I do for you Senator?

Space Senator Alvarez - Captain Astro, I know this is quite unusual, but I have a special mission for you. I need you to meet with the interplanetary cargo ship Alexandria when it reaches your patrol zone perimeter and escort it to Hirano spaceport. The ship is already inward bound from the planet Mori.

Captain Astro - Senator? It is very unusual to divert from my patrol to escort one cargo ship.

Space Senator Alvarez - That ship is carrying the plans and miniature prototype for a hyper secret experimental space propulsion drive.

Captain Astro – There is no escort assigned to the Alexandria?

Space Senator Alvarez - The original plan was to send the drive below the radar of those who might be tempted to steal it by sending it on a common cargo vessel, but recent intelligence reports show that the information somehow leaked and now the mission is in danger. The Alexandria will be without escort until you meet with it. Yours is the nearest patrol cruiser. I am sending you the intercept course.

Narrator - As the C-202 hurries to meet with the Alexandria, the bizarre green zeppelin-like form of the raider ship Nefarious closes on the same target. This marauding ship is commanded by the mad genius Professor Splice, and at his side is his minion D-Grade, a deranged axe-wielding bio-mechanical Tech Drone.

Professor Splice - That's the Alexandria on the scanner. Get the zero ray generator activated before the escort arrives.

Professor Splice - Good, our bio-mechanical equipment is immune to the effects of the ray, so it won't effect us. ACTIVATE THE ZERO RAY GENERATOR! (zero ray sound effect) It's working just as planned. Their propulsion has shut down. Now let's get over there and relieve them of their precious cargo! Extend the boarding claws!

Narrator - As Captain Astro sights the Alexandria, the cargo ship looks to be dead in space. Then the toxic gas attack! The C-202 links up and Captain Astro enters the ship. Several of the internal bulkhead doors cut open, as if by a powerful axe, the crew mostly unconscious. Captain Astro is able to bring around the Captain of the Alexandria, who is still recovering from a dose of toxic gas.

Alexandria Captain - The power failed just as we sighted a strange green ship on an intercept course. If it wasn't for a few of our maintenance Tech Drones, nothing would have been working. They were able to purge the toxic gas from their atmosphere before it became lethal.

R-Brand - I think the Alexandria controls will work now Captain, everything checks out.

Captain Astro - Is this one of your Tech Drones?

Alexandria Captain - Yes, this is R-Brand, he's one of the newer model bio-mechanicals. He and a few others like him were the only equipment on the ship unaffected by the power failure.

R-Brand - Captain, I recovered a partial recording of the ship they encountered from just before everything went dead. Running a recognition check (computer bleep sound effects). We have an identification, Captain!

Captain Astro – No need, R-Brand, I’d recognize that menace anywhere, that’s the ship that hybrid-making madman, Professor Splice. I thought I heard the last of him when we defeated his plan to take over Hirano with an army of highly trained and armed space rabbits. Seems he’s up some new tricks, but what does he want with the new space drive? The Alexandria seems back online. Rumor has it Professor Splice had a base in a nearby asteroid field. Another escort is on it's way to make sure you get safely to Hirano, so I am going after the Professor. Before I go I have a favor to ask of you captain...

Narrator - Blasting off the C-202 makes it way across the space lanes to the asteroid field.

Captain Astro - There's a ship registering on the scanners, going into the asteroid field. That's Splice! It will mean burning off my fuel reserves, but I need to cut in the boosters to intercept before we lose it in the field.

Narrator - Using the last of his fuel the C-202 catches up with the Nefarious. Captain Astro sends a message to the ship on a local tachyon telegraph line.

Captain Astro - This is your final warning Professor Splice. Give yourself up and turn over the drive.

Professor Splice - You're out of your league, Astro. Go back to your pathetic little world before you hurt yourself. Your ship will soon be rendered dead thanks to my zero ray generator. I'm going to blow your ship to pieces. 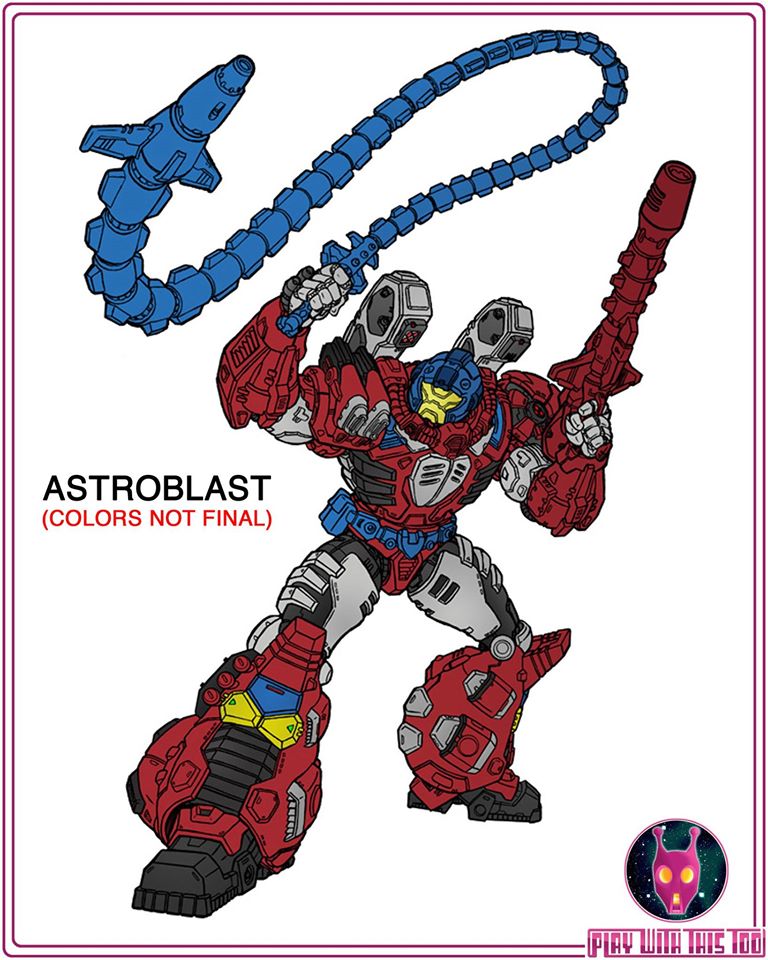 Captain Astro - Firing lasers! (clicking sound). Nothing! The rockets, dead. The propulsion, weapons and tachyon telegraph... all dead!.. Are you ready R-Brand?

Narrator - In his crimson space suit, Captain Astro ejects from the ship with R-Brand. Using the cutting torch arm from R-Brand he cuts into the Professor's ship's rear compartment.

Professor Splice - That's the end of that space-bound do-gooder!

Professor Splice - Go check it out!

Captain Astro - All right hold it you two!

D-Grade - Astroblast huh? You gonna have a taste of my axe or you want one of my toxic missiles?

Captain Astro - "Astroblast" eh? I like the sound of that. (Action whip sound), I figured your own weapons would be immune to your ray, so I got this rifle and energy whip from your weapons locker when I got on board your ship!

Professor Splice - You think you can stop me "Astroblast"?

Captain Astro - Looks like D-Grade did my job for me. Come on R-Brand, we will take the plans and prototype and go. This ship is dead in the sky, Splice, and with my ship destroyed I might have to improvise! I see you have a cryo-capsule for long distance space travel, which will make a good place to hold you while I return to Hirano. When I get back I'll send a ship to pick you up. (sound of the airlock cycling).

Space Senator Alvarez - That was some amazing work you two did there. Not only did you save the plans and the miniature prototype drive, but tying the drive into your space suit with that Tech Drone and using it to get yourself back to the space lanes was a stroke of genius.

Captain Astro - Thank you Senator, but I wasn't completely successful, I lost the C-202 because I underestimated his zero ray generator. A lot of the credit for our success belongs to R-Brand.

Space Senator Alvarez - I'm told R-Brand here was the one that saved the cargo crew's lives from the toxic gas. That was quick thinking on his part.

Space Senator Alvarez - Don't be too worried about your old ship. We are building new ships with bio-mechanical systems to render them immune to attacks like the zero ray generator. Now that we have the drive plans we are not only manufacturing faster cruisers, but we've worked on a design based the modifications to your space suit. The technicians have come with a suit with nearly the power of a whole patrol cruiser thanks to tying in the miniature space drive.

Captain Astro - I can't wait to try it out.

Space Senator Alvarez - You'll get the chance. We have reason to believe Professor Splice was working for a larger threat. We are putting together a team of Protectors to hunt down whoever he was working for, and keep the space lanes safe. That team needs a leader, someone like you.... Of course R-Brand is welcome to join, the two of you seem to work well together. What do you say, would you be willing to don that space suit again and lead the team... Commander Astroblast?

Captain Astro - "Commander Astroblast"?!.. Sir, I can't think of anything I'd rather do.

Narrator - ...and so Commander Astroblast, the leader of the Protectors was appointed in his never ending battle against the menaces of deep space. Tune in next time for another Astro Adventure!