Anti-Tech Revolution: Why and How 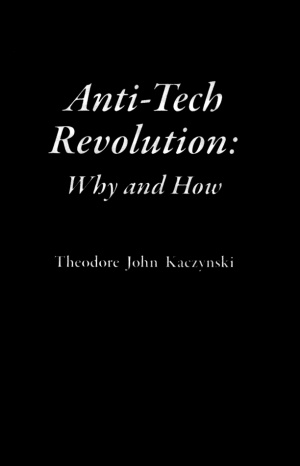 Society is a complex system that can never be subject to rational human control.

Even granting that the behavior of a society is unpredictable in the long term, it may nevertheless be possible to steer a society rationally by means of continual short-term interventions.

However, every complex, large-scale society is subject to internal developments generated by "natural selection" operating on systems that exist within the society.

Why the Technological System Will Destroy Itself

A corollary to Proposition 2 is:

Why "world peace" will be unstable

Three reasons why "world peace" will be unstable:

The world is also currently undergoing a "sixth mass extinction."

The first goal is highly improbable, and the final two will cause humans to "be transformed into something totally alien to human beings as we know them today."

How to Transform a Society: Errors to Avoid

From these postulates we can infer certain rules to which every radical movement should pay close attention.

Strategic Guidelines for an Anti-Tech Movement

To summarize, the expected pattern for a revolution against the technological system will be something like the following: