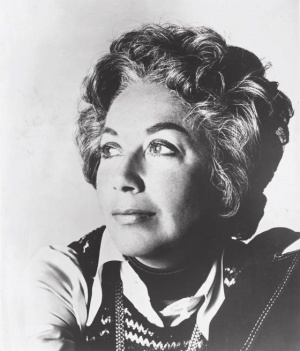 Anne Klein was an innovator, a passionate creator and visionary who helped define the American fashion landscape with her eponymous brand.

Hannah Golofski (Dec 3 1923 – XX, 1974), known professionally as Anne Klein, was an American fashion designer and businesswoman. She was the founder and designer of the brand Anne Klein.

Anne Klein was an innovator, a passionate creator and visionary who helped define the American fashion landscape with her eponymous brand. For over 50 years, Anne Klein has been synonymous with American sportswear.

In 1968, Anne Klein founded her namesake label, forever changing how women thought about and bought clothes. She was the first American designer to dress women in separates, offering them a range of jackets, tops and bottoms. In 1973, Anne competed in the Battle of Versailles, joining the likes of Oscar de la Renta and Bill Blass to put American fashion on the global map.

Over the years, a succession of designers have created clothing under the Anne Klein label, including Donna Karan, who began her career under Anne’s tutelage, Louis Dell’Olio and Isabel Toledo. The world of Anne Klein encompasses womenswear, accessories, footwear, watches, eyewear, jewelry, legwear, sleepwear and more.

Today, the brand is doing more than simply meeting women’s fashion needs; it is celebrating her whole life by providing her with elevated essentials destined to live at the front of her closet and is available in over sixty countries in collaboration with global partners. In 2018, the brand celebrated its 50th anniversary as a women’s lifestyle collection dedicated to timeless American classics.

Anne Klein believed getting dressed should start with smart, beautiful clothing that makes women feel good. in this increasingly busy world, we have become more dependent than ever on clothes that can work as hard as we do, making Anne Klein’s original design ethos more relevant than ever before. “We exist to change women’s lives so they can change the world” Anne Klein.

As of July, 2019 Anne Klein is an American privately held company owned by WHP Global who acquired the brand in July 2019 (news release https://www.businesswire.com/news/home/20190717005129/en/WHP-Global-Launches-New-Brand-Management-Platform)

Born as Hannah Golofski in 1923, Anne Klein is a well-known fashion designer. While studying art at Girl’s Commercial High School, she discovered her talent for design and found a job in the garment making industry once she was done with high school. In a year’s time, she got employed at Varden Petites. There she re-launched the firm’s collection and introduced new trends and cuts of prêt-a-porter line plus an elegant clothing range, for young and slim women, known as Junior Miss.

Between 1937 and 1938, she studied at New York’s Traphagen School of Design to gain formal training in the field. With a background in arts, she did well in design school.

In the year 1948, she married Ben Klein, a manufacturer of clothes. Junior Sophisticates was a new company founded by her husband and there she confidently took the role of the head designer. Under her, the label saw good times and she transformed the variety of apparel available for small-sized women as herself. The label allowed such females to choose from an array of sophisticated styles; a choice they didn’t have before. Klein was the first after Coco Chanel to adapt the clothing styles of men into the way outfits were designed and produced for women. She used ideas from menswear, such as jackets, suits and shirts to style them with a feminine touch. In the 1950s, she launched a range of clothes known as separates. These blouses, slacks, skirts and jackets could be put together to make several different combinations.

In 1960, when Anne and Ben ended their relationship, Anne’s association with her ex-husband’s brand also came to an end. Three years after her separation, she married again and opened her personal studio of design. Her specialty was to redesign the failing apparel lines of other brands. Although Anne was no longer married to Ben, she continued to use his last name.

In 1968, she established her eponymous company as the co-owner and director. The label was opened in collaboration with Gunther Oppenheim, known as the guru of fashion. The next decade saw an expansion of her business, over 750 department stores and boutiques in America shelved Anne Klein’s creations.

In 1973, she was among the ten eminent designers from America and France to receive an invitation for a fashion show aimed to raise funds for the renovations of Versailles. At this time, she approached Tomio Taki of Takihyo and convinced him to become one of the company’s partner with a share of twenty-five percent. Unfortunately, a year after this honor, in 1974 when Anne was fifty, she died of breast cancer, but her company remained intact and remained as a strong label in the world. The largest stake in her company after Anne’s death belonged to Taki and he had an influential say in the business.

Without a doubt, Anne was one of the most admired sportswear fashion designers in the United States. The clothes she made were not only fashionable but practical and smart as well. After the designer passed away, her company was revived by Louis Dell’Olio and Donna Karan until 1985. In 2001, Charles Nalon was appointed to transform the image of Anne Klein & Co., as much more modern and hip. Two years later The Jones Group took over the label.

Anne Klein is an American privately held company owned by WHP Global who acquired the brand in July 2019. Today the brand sells a full lifestyle assortment from apparel, to footwear to watches to jewelry and is sold in 60 countries worldwide

Recognized as one of the groundbreaking designers to put American fashion on the map, Anne Klein wasn't just a designer, she was a champion of authentic style and empowered the way women dressed. 50 years later, her legacy continues to influence contemporary elegance and inspire the modern woman. Launched in the mid-sixties initially as a consulting design studio, Anne Klein used her skills and vision to help brands elevate their collections and built her reputation as an eminent designer and innovator of style. She eventually created her own label that started with sportswear and grew to include women’s separates, jewelry, and accessories. Within a few years of creating the Anne Klein Company, her brand was projected to profit in the millions. The secret to Anne Klein’s success? She understood what the American woman wanted. It was never about fads, but rather focusing on wearable pieces that were versatile and classic to the core. Authenticity without restraint. Anne Klein’s designs resonated deeply with the Harper’s BAZAAR woman, making a constant appearance on our pages and becoming a go-to brand for our editors over the years. Timeless, effortlessly stylish, and empowering, Anne Klein has and always will be a BAZAAR favorite.

This fall marks the 50th anniversary of Anne Klein. In honor of a half century of dressing woman and redefining American style, ShopBAZAAR partnered with the Anne Klein Company to feature a shoppable exhibit showcasing one-of-a-kind vintage pieces throughout the decades and invited industry leaders and entrepreneurs to discover her legacy and inspiring to create their own.
Retrieved from "http://en.wikialpha.org/mediawiki/index.php?title=Anne_Klein&oldid=208430"