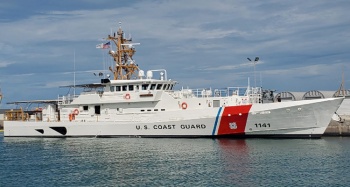 The Coast Guard accepted the Charles Moulthrope on October 22, 2020.

USCGC Charles Moulthrope (WPC-1141) is the United States Coast Guard's 41st Sentinel class cutter cutter, and the first of six to be homeported in Manama, Bahrain.[1]

Like her sister ships she was built in the Bollinger Shipyards, in Lockport, Louisiana.[1]

Like her sister ships, Charles Moulthrope is designed to perform search and rescue missions, port security, and the interception of smugglers.[2] She is armed with a remotely-controlled, gyro-stabilized 25 mm autocannon, four crew served M2 Browning machine guns, and light arms. She is equipped with a stern launching ramp, that allows her to launch or retrieve a water-jet propelled high-speed auxiliary boat, without first coming to a stop. Her high-speed boat has over-the-horizon capability, and is useful for inspecting other vessels, and deploying boarding parties.

The crew's drinking water needs are met through a desalination unit.[3] The crew mess is equipped with a television with satellite reception. 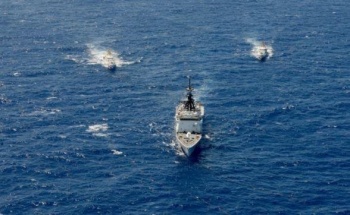 The cutters Hamilton, Charles Moulthrope, and Robert Goldman, on their way to Europe.

The vessel was delivered to the Coast Guard base in Key West for her acceptance trials on October 22, 2020.[4][1]

On April 2, 2021, the Charles Moulthrope, and her sister ship USCGC Robert Goldman (WPC-1142), set out to cross the Altantic Ocean, escorted by the National Security Cutter USCGC Hamilton (WMSL 753).[5] Sentinel class cutters must always be accompanied by a longer range vessel on any voyage longer than their maximum range of 3,000 nautical miles.[6] Once the Charles Moulthrope and Robert Goldman arrive in Europe they will make their way to their homeport of Manama, Bahrain, where they will join U.S. Patrol Forces Southwest Asia. The total length of this journey is 9,000 nautical miles. The two vessels will stop for liaison with allies, on their way to Bahrain.

In 2010, Charles "Skip" W. Bowen, who was then the United States Coast Guard's most senior non-commissioned officer, proposed that all 58 cutters in the Sentinel class should be named after enlisted sailors in the Coast Guard, or one of its precursor services, who were recognized for their heroism.[7][8] The Coast Guard chose Charles Moulthrope as the namesake of the 41st cutter.[1] Moulthorpe was serving on the Revenue Service cutter USRC Commodore Perry, exploring Alaska, in 1896, when he died after a fall to its deck. Not long before, he had saved four of his shipmates after their small boat capsized while unsuccessfully trying to rescue a fifth shipmate.[9]